The forkhead transcription factor FoxO1 has been identified as a negative regulator of insulin/IGF-1 signaling. Its function is inhibited by phosphorylation and nuclear exclusion through a PI3K-dependent pathway. However, the structure/function relationship of FoxO1 has not been elucidated completely. In this study, we carried out mutation analysis of the FoxO1 coactivator–interacting LXXLL motif (amino acids 459–463). Expression of a 3A/LXXAA mutant, in which 3 Akt phosphorylation sites (T24, S253, and S316) and 2 leucine residues in the LXXLL motif (L462 and L463) were replaced by alanine, decreased both Igfbp-1 and G6Pase promoter activity and endogenous Igfbp-1 and G6Pase gene expression in simian virus 40–transformed (SV40-transformed) hepatocytes. Importantly, mutagenesis of the LXXLL motif eliminated FoxO1 interaction with the nicotinamide adenine dinucleotide–dependent (NAD-dependent) deacetylase sirtuin 1 (Sirt1), sustained the acetylated state of FoxO1, and made FoxO1 nicotinamide and resveratrol insensitive, supporting a role for this motif in Sirt1 binding. Furthermore, intravenous administration of adenovirus encoding 3A/LXXAA FoxO1 into Leprdb/db mice decreased fasting blood glucose levels and improved glucose tolerance and was accompanied by reduced G6Pase and Igfbp-1 gene expression and increased hepatic glycogen content. In conclusion, the LXXLL motif of FoxO1 may have an important role for its transcriptional activity and Sirt1 binding and should be a target site for regulation of gene expression of FoxO1 target genes and glucose metabolism in vivo. 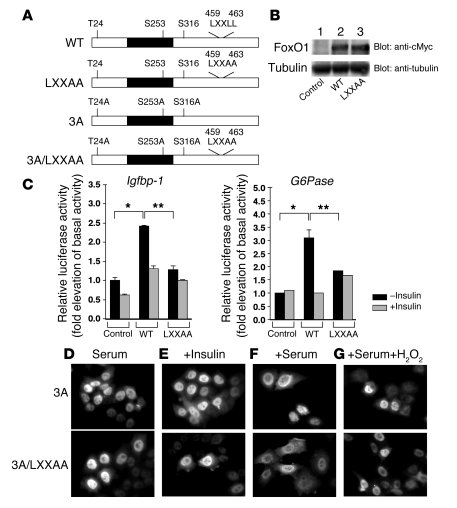