Dynamic and reciprocal epithelial-mesenchymal interactions are critical for the normal morphogenesis and maintenance of epithelia. Epimorphin has been identified as a unique molecule expressed by mesenchymal cells and myofibroblasts and has putative morphogenetic effects in multiple epithelial tissues, including intestine, skin, mammary gland, lung, gallbladder, and liver. To define the in vivo role of epimorphin, we created epimorphin-null mice by targeted inactivation of the epimorphin gene. Male epimorphin–/– mice are sterile due to abnormal testicular development and impaired spermatogenesis. Intestinal growth is increased in epimorphin–/– mice due to augmented crypt cell proliferation and crypt fission during the neonatal (suckling) period, mediated at least in part by changes in bone morphogenetic protein (Bmp) and Wnt/β-catenin signaling pathways. Colonic mucosal injury and colitis induced by dextran sodium sulfate (DSS) are ameliorated in epimorphin–/– mice, probably due to the increased proliferative capacity of the epimorphin–/– colon. These in vivo findings support the notion that epimorphin is a key stromal regulator of epithelial cell proliferation and growth in the intestine. In addition, our studies demonstrate a novel and critical role for epimorphin in regulating testicular development and growth as well as spermatogenesis.

Generation and characterization of mice. 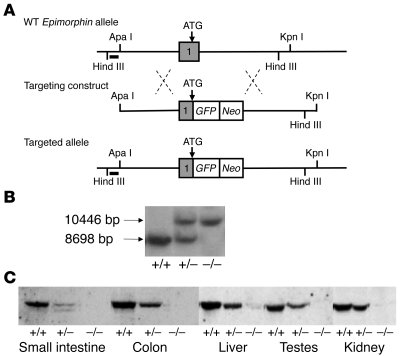 () Targeting scheme to disrupt the locus. Homologous recombination between the targeting vector and the WT allele produced the targeted allele in which 30 bp of the coding sequence in exon 1 and 1015 bp in intron 1 of the gene were replaced by the coding sequence of enhanced GFP and a Neo cassette. The black bar represents the location of the probe used to identify targeted ES cell clones. The arrows denote the position of the initiator methionine of epimorphin and GFP. () Southern blot hybridization of Hind III–digested genomic DNA. A 10.4-kb band in the targeted allele and 8.7-kb band in the WT allele were produced as expected. () Immunoblot analysis of protein extracts from epimorphin WT (+/+), heterozygous (+/–), and null (–/–) mice. Total protein from small intestine, colon, liver, kidney, and testis (100 μg per tissue) was loaded onto the gel. Epimorphin was reduced in the tissues of heterozygous mice and absent in null mice.