Neurotoxicity from accumulation of misfolded/mutant proteins is thought to drive pathogenesis in neurodegenerative diseases. Since decreasing levels of proteins responsible for such accumulations is likely to ameliorate disease, a therapeutic strategy has been developed to downregulate almost any gene in the CNS. Modified antisense oligonucleotides, continuously infused intraventricularly, have been demonstrated to distribute widely throughout the CNS of rodents and primates, including the regions affected in the major neurodegenerative diseases. Using this route of administration, we found that antisense oligonucleotides to superoxide dismutase 1 (SOD1), one of the most abundant brain proteins, reduced both SOD1 protein and mRNA levels throughout the brain and spinal cord. Treatment initiated near onset significantly slowed disease progression in a model of amyotrophic lateral sclerosis (ALS) caused by a mutation in SOD1. This suggests that direct delivery of antisense oligonucleotides could be an effective, dosage-regulatable means of treating neurodegenerative diseases, including ALS, where appropriate target proteins are known.

Distribution of antisense oligonucleotides after infusion into the right lateral ventricle in rats and Rhesus monkeys. 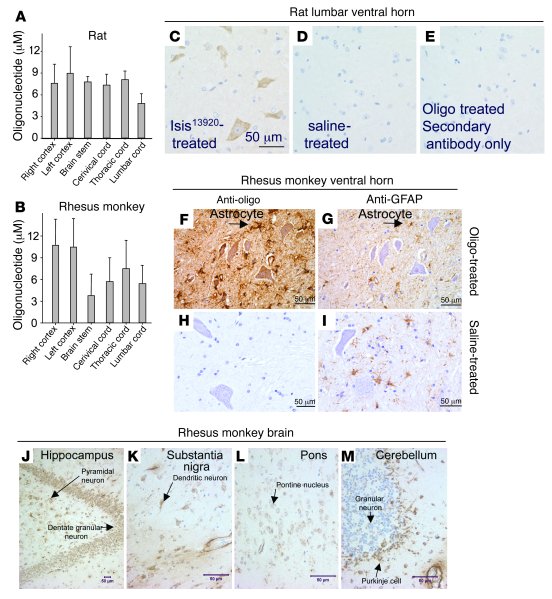