In this study, a large number of naturally processed peptides was isolated and identified from the human diabetes-susceptible class II MHC molecules HLA-DQ8 (DQA1*0301,DQB1*0302) and from murine I-Ag7 species, both of which are expressed in genetically identical APC lines. The peptides presented during the processing of autologous proteins were highly selective in showing sequence specificity, mainly consisting of 1 or more acidic residues at their C terminus. Testing for binding to the MHC molecules revealed that the position 9 (P9) acidic residues of the peptides contributed decisively to binding. For HLA-DQ8, the P1 residue, which was also an acidic amino acid, influenced binding positively. Both HLA-DQ8 and I-Ag7 selected for common peptides that bound in the same register. There was no evidence for selection of peptides having nonspecific or promiscuous binding. Thus, diabetogenic class II MHC molecules are highly selective in terms of the peptides presented by their APCs, and this is governed by the features of their P9 anchor pocket. These results are in striking contrast to those from studies examining synthetic peptide or phage display libraries, in which many peptides were shown to bind. 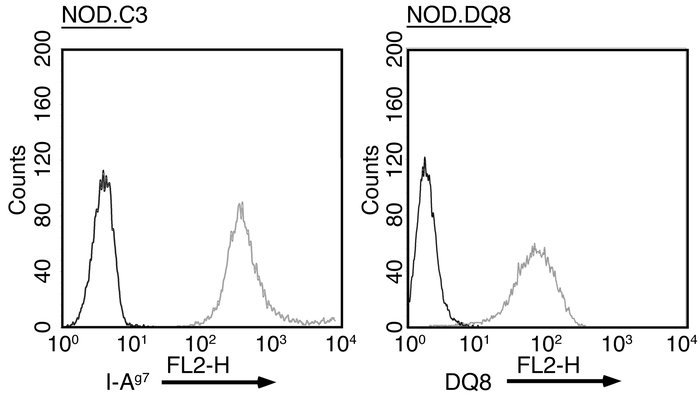 Class II MHC expression among APC lines. NOD.C3 and NOD.DQ8 cells were stained with anti–I-Ag7 or anti-DQ8 mAb (gray lines), respectively, and then analyzed by FACS. Black lines indicate the isotype control for each cell line.