Rats and mice exhibit a spontaneous attraction for lipids. Such a behavior raises the possibility that an orosensory system is responsible for the detection of dietary lipids. The fatty acid transporter CD36 appears to be a plausible candidate for this function since it has a high affinity for long-chain fatty acids (LCFAs) and is found in lingual papillae in the rat. To explore this hypothesis further, experiments were conducted in rats and in wild-type and CD36-null mice. In mice, RT-PCR experiments with primers specific for candidate lipid-binding proteins revealed that only CD36 expression was restricted to lingual papillae although absent from the palatal papillae. Immunostaining studies showed a distribution of CD36 along the apical side of circumvallate taste bud cells. CD36 gene inactivation fully abolished the preference for LCFA-enriched solutions and solid diet observed in wild-type mice. Furthermore, in rats and wild-type mice with an esophageal ligation, deposition of unsaturated LCFAs onto the tongue led to a rapid and sustained rise in flux and protein content of pancreatobiliary secretions. These findings demonstrate that CD36 is involved in oral LCFA detection and raise the possibility that an alteration in the lingual fat perception may be linked to feeding dysregulation. 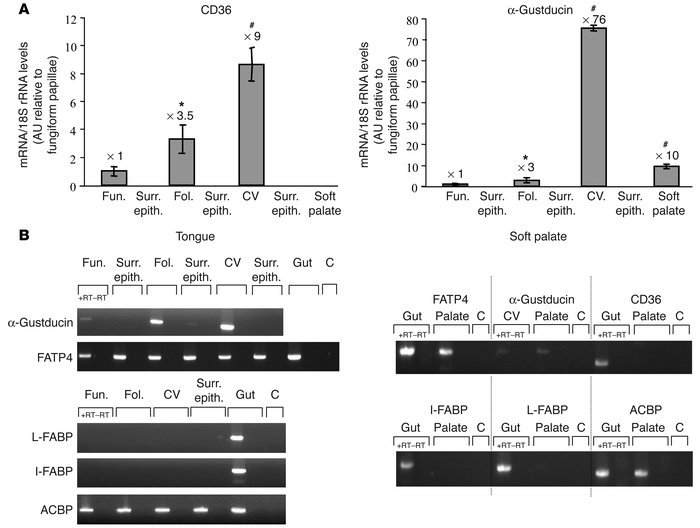 Expression pattern of various lipid-binding proteins and α-gustducin throughout the tongue and palatal epithelium in the mouse. Circumvallate, foliate, and fungiform papillae and respective surrounding nongustatory epithelium (negative control) were isolated under a microscope, and total RNA was prepared as described in Methods. () Quantification of CD36 and α-gustducin mRNA by the SYBR Green method. Each value corresponds to a pool of total RNA from 3–5 mice. Data represent mean + SEM; = 5. * < 0.05; # < 0.001. The expression levels relative to fungiform papillae are indicated above the bars. () RT-PCR analysis of α-gustducin, CD36, FATP-4, L-FABP, I-FABP, and ACBP mRNA. Each experiments is representative of 3 independent experiments performed on a pool of total RNA from 3–5 mice. C, control; CV, circumvallate papillae; Fol., foliate papillae; Fun., fungiform papillae; +RT–RT, RT-PCR without reverse transcriptase; Surr. epith., surrounding nongustatory epithelium.