The fickle finger of fate

The fickle finger of fate

In this issue of the JCI, Niedermaier and colleagues demonstrate that a chromosomal inversion in mice results in dysregulation of Sonic hedgehog (Shh), such that Shh is ectopically expressed in a skeletogenic domain typically occupied by Indian hedgehog (Ihh). This molecular reversal eliminates phalangeal joint spaces, and consequently, Short digits (Dsh) heterozygotes (Dsh/+) have brachydactyly (shortened digits). Ihh is normally downregulated in regions that will become the joint space, but in Dsh/+ mice, Shh bypasses this regulatory control and persists; accordingly, cells maintain their chondrogenic fate and the developed digits are shorter than normal. The significance of these data extends far beyond the field of skeletal biology: they hint at the very real possibility that the endogenous Shh regulatory region contains a repressor designed to segregate the activity of Shh from Ihh. The existence of such a repressor provides a window into the distant past, revealing that Shh and Ihh must once have shared responsibilities in establishing tissue boundaries and orchestrating vertebrate tissue morphogenesis. 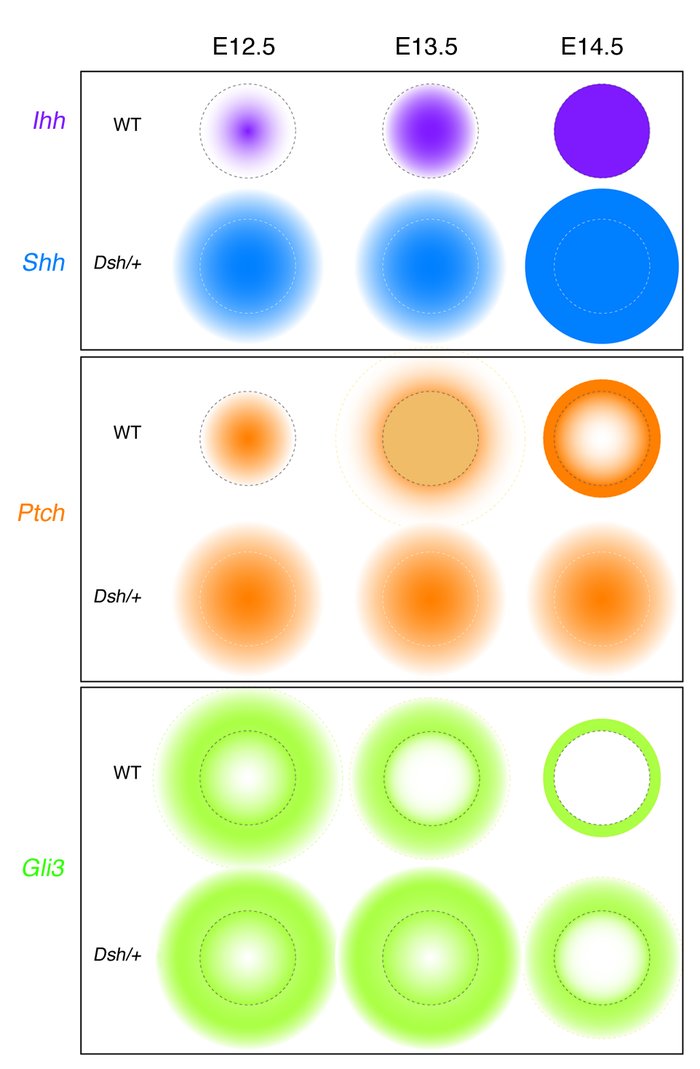 Disrupted expression boundaries in animals lead to perichondrial and joint defects (). A transverse schematic of the phalangeal skeletal condensation, showing expression domains corresponding to a specific Hedgehog gene ( in WT, in ), the Hedgehog target , and the Hedgehog repressor . Dotted lines indicate the normal cartilage-perichondrium boundary. In WT phalanges, (purple) is initially expressed (E12.5) in a small domain that expands over time to encompass the skeletal condensation. At E12.5 in phalanges, expression (blue) encompasses the normal Ihh domain and over time extends beyond what would normally be the cartilage-perichondrium boundary. (orange), an indicator of Hedgehog responsiveness, is first expressed in WT phalanges coincident with ; eventually, is downregulated in cells expressing and upregulated in cells adjacent to the Ihh domain, where it functions to limit the spread of Hedgehog expression. Note the absence of color within the element, which shows the relative lack of Ptch in this domain (). In phalanges, is expressed coincident with the broader domain of ; however, in contrast to what occurs in WT tissues, does not become downregulated in chondrocytes. (green), a repressor of Hedgehog signaling, is initially expressed in WT phalanges in a domain overlapping with ; over time, this domain is restricted to the perichondrium, where limits the activity of the Hedgehog protein. In phalanges the expression domain is initially broader, and only after an extended period of time does it become restricted to the perichondrium.