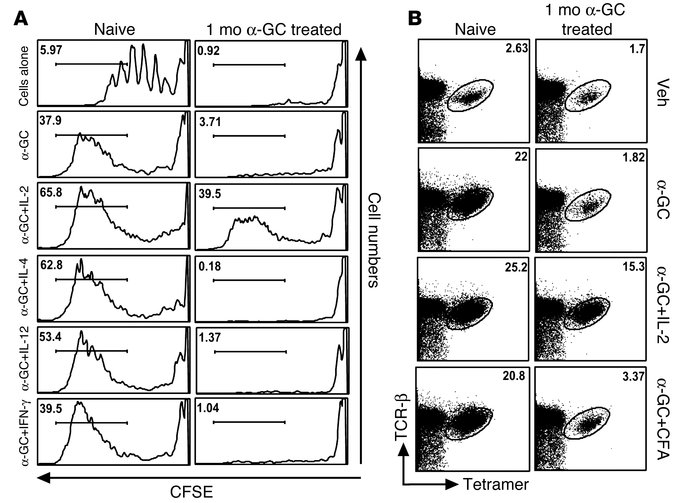 Exogenous IL-2 overcomes NKT cell anergy. () IL-2 overcomes NKT cell anergy in vitro. Spleen cells from naive mice or from mice injected 1 month earlier with α-GalCer were labeled with CFSE. Cells (2 × 105 per well) were then cultured with α-GalCer (100 ng/ml) for 24 hours in the presence or absence of IL-2, IL-4, IL-12, or IFN-γ (2.5–10 ng/ml). Cells were then washed and cultured for an additional 96 hours without α-GalCer in the presence or absence of the respective cytokines. At the end of the culture period, cells were harvested, stained with tetramer-PE and anti-B220–PerCP, and analyzed by flow cytometry. CFSE dilution was analyzed on B220–tetramer+ cells. A representative experiment of 3 independent experiments, using a cytokine concentration of 10 ng/ml, is shown. () IL-2 overcomes NKT cell anergy in vivo. Naive mice or mice injected with α-GalCer 1 month earlier were injected with vehicle, α-GalCer, α-GalCer plus IL-2 (500 ng, i.p.), or α-GalCer plus CFA (200 μg, s.c.). Three days later, mice were sacrificed, and NKT cell expansion was evaluated in the spleen by flow cytometry. Data are representative of results for 3 mice per group.