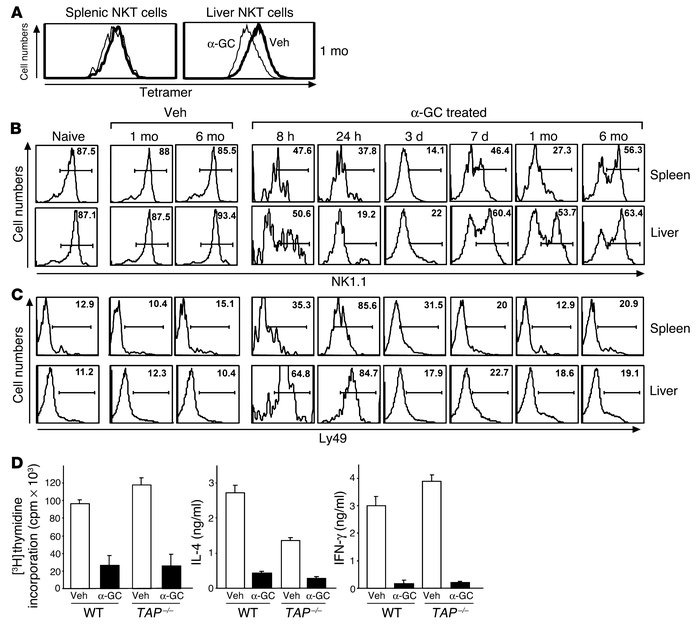 Role of TCR, NK1.1, and Ly49 expression in the maintenance of NKT cell anergy. (–) Surface expression of TCR, NK1.1, and Ly49 molecules. Mice were injected with α-GalCer or vehicle, and spleen and liver cells were prepared at the indicated time points. Cells were stained with anti–TCR-β–FITC or –allophycocyanin, tetramer-PE, anti-B220–PerCP, and anti-NK1.1–allophycocyanin or a cocktail of FITC-labeled anti-Ly49 antibodies, and analyzed by flow cytometry. Levels of TCR expression on B220–tetramer+ cells (), NK1.1 expression on B220–TCR-β+tetramer+ cells (), and Ly49 expression on B220–TCR-β+tetramer+ cells () were evaluated. Data are representative of 4 independent experiments with 2 mice in each group. () Induction of NKT cell anergy in mice lacking classical MHC class I molecules. WT B6 and mice were injected with α-GalCer or vehicle. Fifteen days later, spleen cells were prepared and restimulated in vitro with α-GalCer (100 ng/ml). Proliferative and cytokine responses were evaluated as in Figure . Results shown represent the mean ± SEM of 2 mice in each group and are representative of 2 individual experiments.