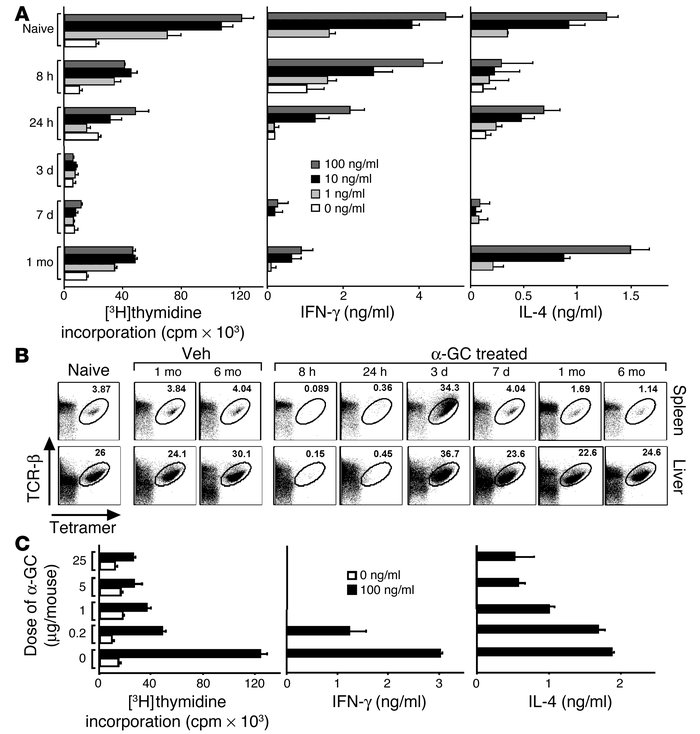 α-GalCer induces unresponsiveness to rechallenge with this antigen in mice. () The in vitro recall response of mice to α-GalCer immunization. Mice were injected with 5 μg α-GalCer (i.p.) and sacrificed at the indicated time points, and splenocytes (2 × 105 per well) were cultured with graded doses of α-GalCer. After 3 days, proliferation was assessed by [3H]thymidine incorporation, and culture supernatants were evaluated for IL-4 and IFN-γ levels by ELISA. Proliferation results represent the mean ± SEM of triplicate wells, and cytokine results represent the mean ± SEM of 2 mice. Representative data of 4 individual experiments are shown. () In vivo dynamics of the NKT cell population in response to α-GalCer (α-GC) administration. Mice were injected with α-GalCer or vehicle (veh), spleen or liver mononuclear cells were prepared at the indicated time points, and cells were stained with anti–TCR-β–FITC, tetramer-PE, and anti-B220–peridinin chlorophyll protein (anti-B220–PerCP) and analyzed by flow cytometry. Numbers indicate the percentage of TCR-β+tetramer+ cells among B220– cells. A representative of 3 separate experiments is shown. () Influence of the injected α-GalCer dose. Mice were treated with the indicated doses of α-GalCer and analyzed 1 month later as in .