Akt, or protein kinase B, is a multifunctional serine-threonine protein kinase implicated in a diverse range of cellular functions including cell metabolism, survival, migration, and gene expression. However, the in vivo roles and effectors of individual Akt isoforms in signaling are not explicitly clear. Here we show that the genetic loss of Akt1, but not Akt2, in mice results in defective ischemia and VEGF-induced angiogenesis as well as severe peripheral vascular disease. Akt1 knockout (Akt1–/–) mice also have reduced endothelial progenitor cell (EPC) mobilization in response to ischemia, and reintroduction of WT EPCs, but not EPCs isolated from Akt1–/– mice, into WT mice improves limb blood flow after ischemia. Mechanistically, the loss of Akt1 reduces the basal phosphorylation of several Akt substrates, the migration of fibroblasts and ECs, and NO release. Reconstitution of Akt1–/– ECs with Akt1 rescues the defects in substrate phosphorylation, cell migration, and NO release. Thus, the Akt1 isoform exerts an essential role in blood flow control, cellular migration, and NO synthesis during postnatal angiogenesis. 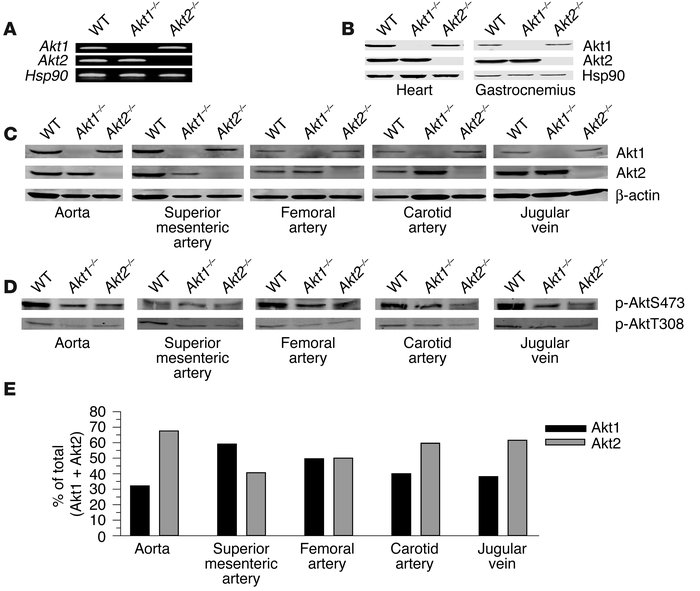