Little is known about the molecules that control the development and function of CD4+CD25+ Tregs. Recently, it was shown that the transcription factor FOXP3 is necessary and sufficient for the generation of CD4+CD25+ Tregs in mice. We investigated the capacity of FOXP3 to drive the generation of suppressive CD4+CD25+ Tregs in humans. Surprisingly, although ectopic expression of FOXP3 in human CD4+ T cells resulted in induction of hyporesponsiveness and suppression of IL-2 production, it did not lead to acquisition of significant suppressor activity in vitro. Similarly, ectopic expression of FOXP3Δ2, an isoform found in human CD4+CD25+ Tregs that lacks exon 2, also failed to induce the development of suppressor T cells. Moreover, when FOXP3 and FOXP3Δ2 were simultaneously overexpressed, although the expression of several Treg-associated cell surface markers was significantly increased, only a modest suppressive activity was induced. These data indicate that in humans, overexpression of FOXP3 alone or together with FOXP3Δ2 is not an effective method to generate potent suppressor T cells in vitro and suggest that factors in addition to FOXP3 are required during the process of activation and/or differentiation for the development of bona fide Tregs. 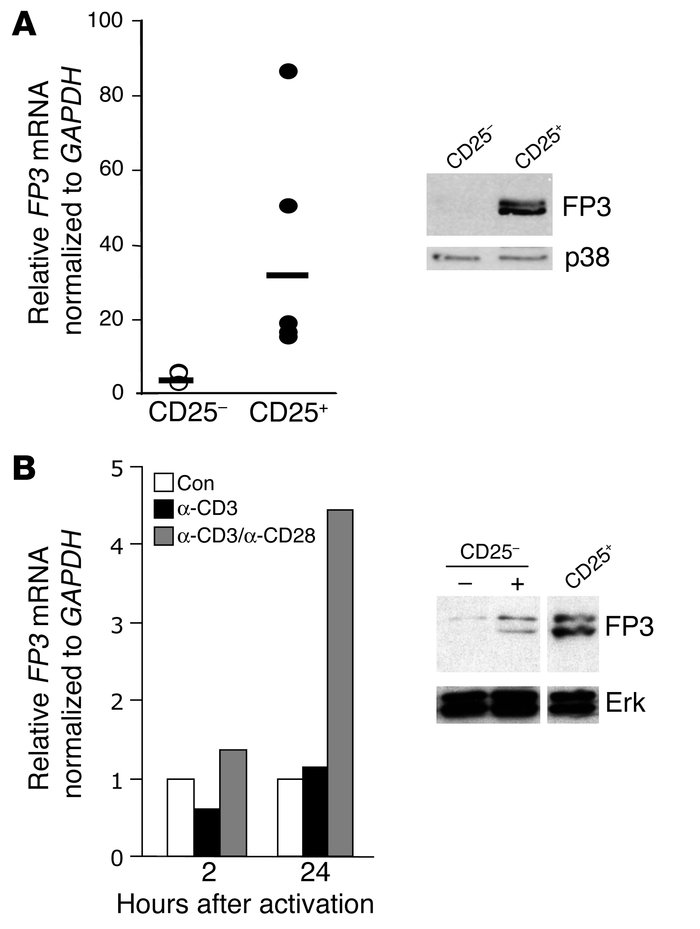 Endogenous expression of FOXP3 (FP3) in human CD4+ T cells. CD4+ T cells were purified and separated into CD25– and CD25+ cells. () Expression of FOXP3 was determined by quantitative RT-PCR, with each point representing an individual donor, and Western blotting. () Highly purified CD4+CD25– T cells were activated with immobilized anti-CD3 (1 μg/ml) and/or anti-CD28 (1 μg/ml) for the indicated times and assayed for mRNA expression. Levels of FOXP3 protein were determined after 3 days in cells left unstimulated (–) or stimulated (+) with anti-CD3 and anti-CD28. Protein levels were compared with those in ex vivo CD4+CD25+ Tregs. Results are representative of 5 experiments. Con, control.