Sick to death and not going to take it anymore! Reforming health care for the last years of life 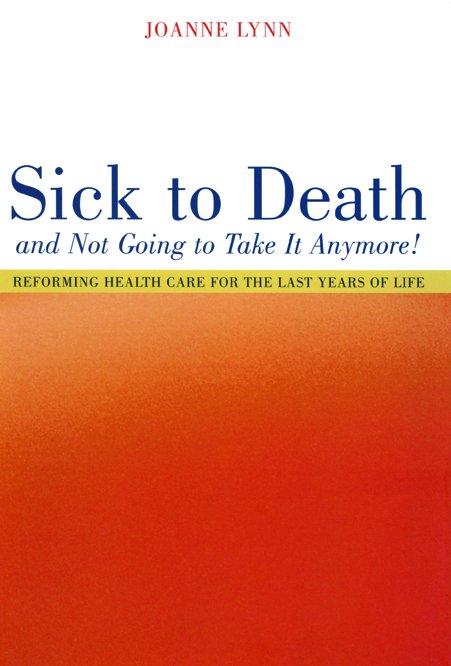 The continuing rapid growth in the number of individuals in the oldest age groups in the United States and other developed countries is already forcing many changes in the way these societies function. In Sick to death and not going to take it anymore! Joanne Lynn focuses on one such change, the manner in which health care is provided for elderly Americans.

This book grew out of a report commissioned in 2000 by the Milbank Memorial Fund, an endowed foundation engaging in nonpartisan analysis of significant health policy issues. Lynn makes it clear that the need to reform health care for the elderly arises fundamentally from increased life-spans, and she explores many important related issues, including the primary role that chronic conditions, rather than acute episodic illnesses, play in determining the health of the aging. Lynn recognizes that the health of an older person is typically affected not by a single disease but by a combination of several coexisting conditions. Consequently, an individual's ability to perform daily activities often provides a better index of overall health than does any one diagnosis. The author's knowledge of the many practical challenges confronting older persons with severe health problems, as well as their families, is extensive and compassionately expressed. She appropriately emphasizes that coordination of care from multiple providers is essential but difficult for the average family to achieve. The need for greater focus on patient comfort, especially in freedom from excessive pain, and for respectful care are stressed.

An especially direct and thought-provoking part of the book is the discussion of the broad changes to the delivery of health care that our society may be forced to confront in meeting the needs outlined above. These include limiting access to some treatments by considering cost as well as effectiveness when determining what Medicare will cover, thus restricting the availability of treatments to older people. This prescription is controversial and will not be embraced by some who feel that the decisions made by individuals and their health care providers should be given priority over more general considerations, such as the underlying cost to society through the Medicare system. The notion that a necessarily imperfect estimation of people's life expectancy, such as the “last tenth of their lives,” may be an important criterion in reducing access to very expensive treatments will be jarring to many readers despite the rational arguments made in its favor, which center on two ideas. First, even interventions that are highly effective (as measured by how well they treat the conditions for which they are intended) may have much lower benefits if assessed by the increases in enjoyable lifespan that they offer to older people. Second, some people would judge that the funds used for such expensive treatments would be better spent on measures that offer substantial benefits to a larger number of older people.

For an older person, there is usually no clear demarcation between a period of living with serious health problems, with which she or he may struggle for many years, and an end-of-life period when death is recognized as imminent. As Lynn clearly outlines, family members and even the most experienced clinicians have difficulty accurately forecasting how long an elderly person with serious health problems will survive. Judging whether each of Lynn's points applies to a particular person in poor health sometimes depends, implicitly or explicitly, on estimating that person's distance from death. The inability to accurately predict survival for a single person, therefore, leaves the reader sometimes unsure of precisely which persons a given point of Lynn's pertains to. As noted previously, the typical older person in poor health has not one but several coexisting medical conditions so that it is sometimes difficult to say with any certainty that a particular diagnosis accounts for a particular symptom. Lynn makes extensive use of three trajectories seemingly specific to single conditions, i.e., “short period of evident decline – typical of cancer,” “chronic illness with exacerbations and sudden dying – typical of organ system failure,” and “a long dwindling – typical of frailty and dementia.” These trajectories are meant to illustrate the courses that the last years of life may follow for older persons and to present a basis for planning reforms, but Lynn's use of them may confuse more than clarify. Lynn also seems to take a skeptical view of disease prevention for older persons, reasoning that preventive measures are less relevant than are measures to increase comfort. This view, however, appears to be based less on careful, empiric appraisals of the costs and benefits of preventive measures in this age group than on a recognition of the differences between older and younger persons in the conditions we try to prevent and the balance of cost and gain in that prevention.

Taken as a whole, Sick to death represents a thoughtful introduction to a challenging subject. In many ways the health care we currently provide to older persons falls short, and Lynn clearly and compassionately describes the devastating effects of these shortfalls on patients and their families. She emphasizes the urgent need for reform of the health care system and the difficult choices we face in effecting this reform. The book's limitations mainly reflect the difficulties we must confront in solving this pressing problem.