Localization of membrane-bound complement inhibitors within the mouse kidney. 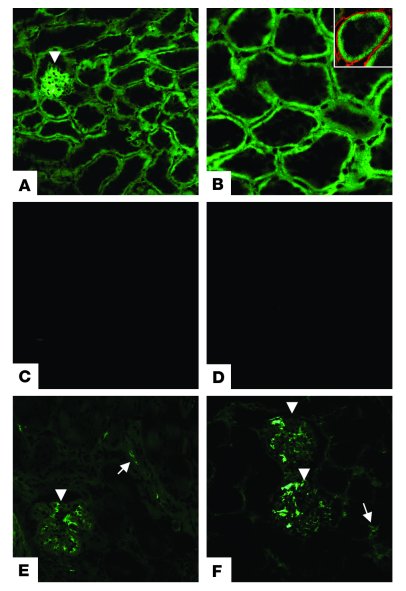 Three different membrane-bound complement inhibitors are located within the mouse kidney. () Crry is expressed in the glomeruli (arrowhead) and in tubules. () Crry in the renal tubules is polarized to the basolateral aspect of the tubules. Inset: Dual staining for Crry (green) and type IV collagen (red) demonstrates that expression of Crry is adjacent to the tubular basement membrane. Staining with secondary antibody alone in unmanipulated kidneys () and kidneys subjected to ischemia and 2 hours of reperfusion () demonstrate the specificity of staining with the anti-Crry antibody. () CD59 and () DAF are also expressed in glomeruli (arrowheads). In addition, these inhibitors may be expressed in the small blood vessels (arrows), but not in tubules. Original magnification, ×200 ( and –); ×400 ().