T cell differentiation is a progressive process characterized by phenotypic and functional changes. By transferring tumor-specific CD8+ T cells into tumor-bearing mice at various stages of differentiation, we evaluated their efficacy for adoptive immunotherapy. We found that administration of naive and early effector T cells, in combination with active immunization and IL-2, resulted in the eradication of large, established tumors. Despite enhanced in vitro antitumor properties, more-differentiated effector T cells were less effective for in vivo tumor treatment. Several events may underlie this paradoxical phenomenon: (a) downregulation of lymphoid-homing and costimulatory molecules; (b) inability to produce IL-2 and access homeostatic cytokines; and (c) entry into a proapoptotic and replicative senescent state. While the progressive acquisition of terminal effector properties is characterized by pronounced in vitro tumor killing, in vivo T cell activation, proliferation, and survival are progressively impaired. These findings suggest that the current methodology for selecting T cells for transfer is inadequate and provide new criteria for the generation and the screening of optimal lymphocyte populations for adoptive immunotherapy. 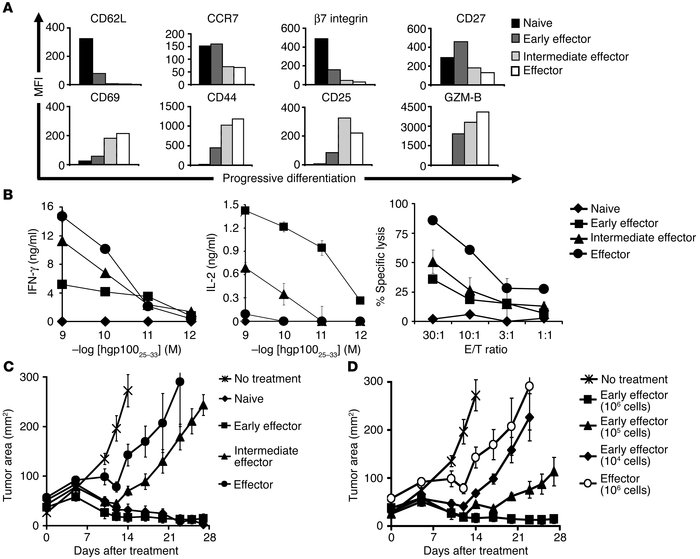