NO/redox disequilibrium in the failing heart and cardiovascular system

NO/redox disequilibrium in the failing heart and cardiovascular system

There is growing evidence that the altered production and/or spatiotemporal distribution of reactive oxygen and nitrogen species creates oxidative and/or nitrosative stresses in the failing heart and vascular tree, which contribute to the abnormal cardiac and vascular phenotypes that characterize the failing cardiovascular system. These derangements at the integrated system level can be interpreted at the cellular and molecular levels in terms of adverse effects on signaling elements in the heart, vasculature, and blood that subserve cardiac and vascular homeostasis. 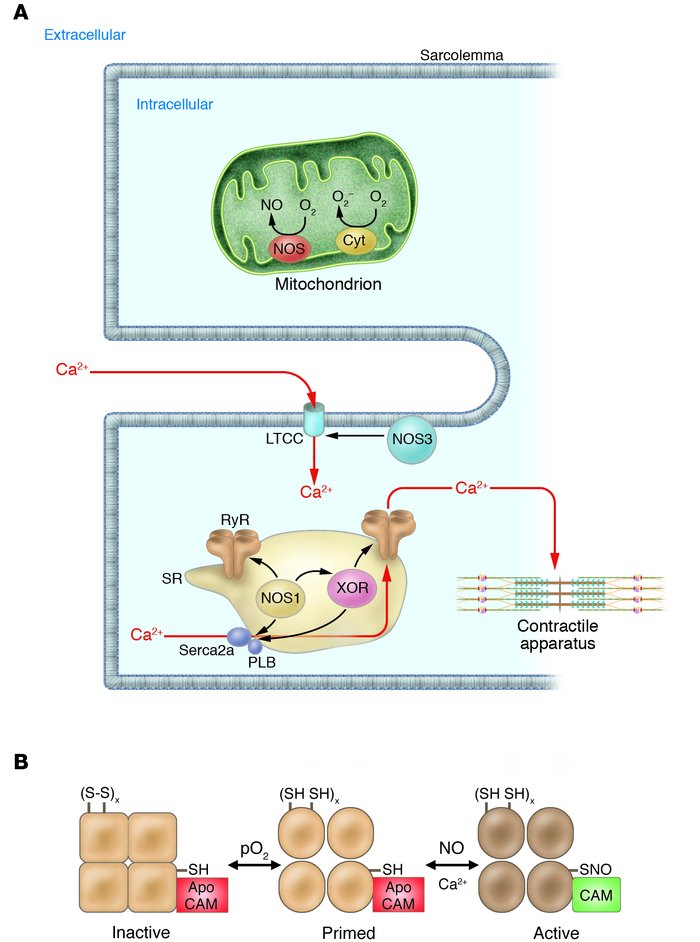 () Spatial localization of NOSs and oxidases in the cardiac myocyte. NOS3 localizes to the sarcolemmal caveolae (, ), where it participates in regulation of L-type Ca2+ channel (LTCC) currents, mediated either by cGMP formation (S64) or by -nitrosylation of the LTCC (S13). NOS1 localizes to the SR (), where it facilitates the SR Ca2+ cycle () by -nitrosylation of the RyR and possibly the SR Ca2+ ATPase (SERCA2a) (, ). XOR also localizes to the SR in the cardiac myocyte; upregulation of protein or activity (caused by SR NOS1 deficiency) disrupts SNO regulation of the RyR (). Other oxidases (e.g., NADPH oxidase) have been described in the cardiac myocyte (), but precise signaling roles, identities, and/or subcellular localizations have not been elucidated. The mitochondria are an additional source of both O2– and NO, which may participate in control of mitochondrial respiration (S65–S67) and apoptosis (S41). Cyt, cytochrome; PLB, phospholamban. () Regulation of the RyR by -nitrosylation. -nitrosylation occurs at a single cysteine residue (1 of approximately 50 free thiols), which resides within a calmodulin-binding domain of the cardiac RyR (). NO binding (shown for RyR1 of skeletal muscle) occurs in an oxygen-concentration–dependent manner and primes the channel for calmodulin regulation (). Higher pO2 oxidizes a small set of RyR-associated thiols that regulate the channel’s responsiveness to NO. SH, reduced thiol; S-S, oxidized thiols; CAM, calmodulin; x refers to a small set between 1 and 3.