B cell chronic lymphocytic leukemia (CLL) is a disease of expanding monoclonal B cells whose B cell receptor (BCR) mutational status defines 2 subgroups; patients with mutated BCRs have a more favorable prognosis than those with unmutated BCRs. CLL B cells express a restricted BCR repertoire including antibodies with quasi-identical complementarity-determining region 3 (CDR3), which suggests specific antigen recognition. The antigens recognized by CLL antibodies may include autoantigens since about half of CLL B cells produce autoreactive antibodies. However, the distribution of autoreactive antibodies between Ig heavy-chain variable–unmutated (IgV-unmutated) CLL (UM-CLL) and IgV-mutated CLL (M-CLL) is unknown. To determine the role of antibody reactivity and the impact of somatic hypermutation (SHM) on CLL antibody specificity, we cloned and expressed in vitro recombinant antibodies from M- and UM-CLL B cells and tested their reactivity by ELISA. We found that UM-CLL B cells expressed highly polyreactive antibodies whereas most M-CLL B cells did not. When mutated nonautoreactive CLL antibody sequences were reverted in vitro to their germline counterparts, they encoded polyreactive and autoreactive antibodies. We concluded that both UM-CLLs and M-CLLs originate from self-reactive B cell precursors and that SHM plays an important role in the development of the disease by altering original BCR autoreactivity. 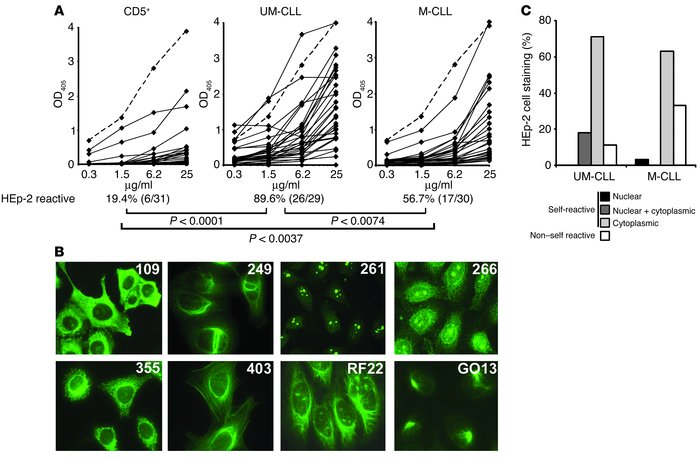