Angiogenesis and vascular remodeling support fibroproliferative processes; however, no study has addressed the importance of angiogenesis during fibro-obliteration of the allograft airway during bronchiolitis obliterans syndrome (BOS) that occurs after lung transplantation. The ELR+ CXC chemokines both mediate neutrophil recruitment and promote angiogenesis. Their shared endothelial cell receptor is the G-coupled protein receptor CXC chemokine receptor 2 (CXCR2). We found that elevated levels of multiple ELR+ CXC chemokines correlated with the presence of BOS. Proof-of-concept studies using a murine model of BOS not only demonstrated an early neutrophil infiltration but also marked vascular remodeling in the tracheal allografts. In addition, tracheal allograft ELR+ CXC chemokines were persistently expressed even in the absence of significant neutrophil infiltration and were temporally associated with vascular remodeling during fibro-obliteration of the tracheal allograft. Furthermore, in neutralizing studies, treatment with anti-CXCR2 Abs inhibited early neutrophil infiltration and later vascular remodeling, which resulted in the attenuation of murine BOS. A more profound attenuation of fibro-obliteration was seen when CXCR2–/– mice received cyclosporin A. This supports the notion that the CXCR2/CXCR2 ligand biological axis has a bimodal function during the course of BOS: early, it is important for neutrophil recruitment and later, during fibro-obliteration, it is important for vascular remodeling independent of neutrophil recruitment. 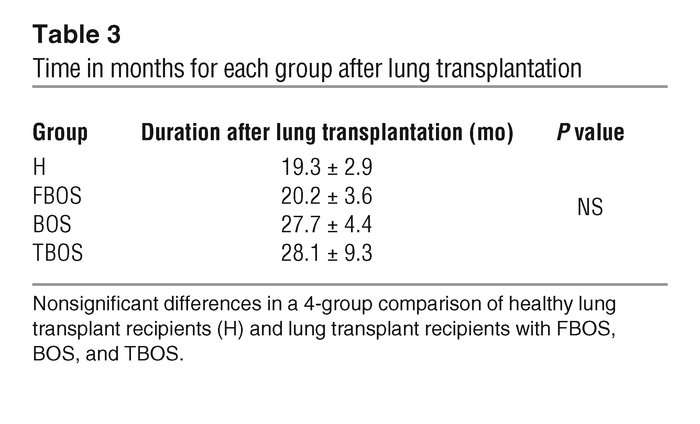 Time in months for each group after lung transplantation