Structural and functional alterations in the Ca2+ regulatory proteins present in the sarcoplasmic reticulum have recently been shown to be strongly involved in the pathogenesis of heart failure. Chronic activation of the sympathetic nervous system or of the renin-angiotensin system induces abnormalities in both the function and structure of these proteins. We review here the considerable body of evidence that has accumulated to support the notion that such abnormalities contribute to a defectiveness of contractile performance and hence to the progression of heart failure. 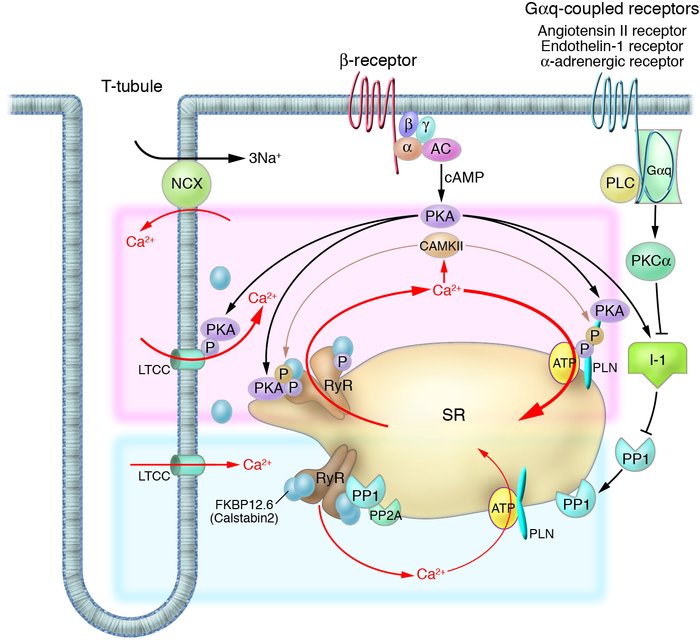 Intracellular Ca2+ cycling and associated signaling pathway in cardiomyocytes. On a beat-by-beat basis, a calcium transient is evoked by the initial influx of a small amount of Ca2+ through the LTCC and the subsequent large-scale Ca2+ release from the SR through the RyR. During diastole, cytosolic Ca2+ is taken up into the SR by the PLN-regulated SERCA2a pump. β receptor–mediated PKA stimulation regulates this Ca2+ cycling by phosphorylating LTCC, RyR, and PLN. In normal hearts, sympathetic stimulation activates β1-adrenergic receptor, which in turn stimulates the production of cAMP by adenylyl cyclase and thereby activates PKA. PKA phosphorylates PLN and RyR, both of which contribute to an increased intracellular Ca2+ transient and enhanced cellular contractility (pink zone signal). PP1 and PP2A regulate the dephosphorylation process of these Ca2+ regulatory proteins (RyR, PLN, LTCC) (blue zone signaling). Activation of the Gαq-coupled receptors (angiotensin II receptor, endothelin 1 receptor, or α-adrenergic receptor) activates PLC, which in turn activates PKC-α. The PKC-α phosphorylates I-1, augmenting the activity of PP1 and causing hypophosphorylation of PLB. The PLB hypophosphorylation inhibits SERCA2a activity, thereby decreasing SR Ca2+ uptake. The increased Ca2+ level in the cytosol activates CAMKII, which affects the functions of RyR and PLN. Activation or deactivation of these molecules at a node in the signaling cascade affects beat-by-beat Ca2+ cycling, and such maneuvers have recently been highlighted as potential new therapeutic strategies against HF. α, G protein subunit α; β, G protein subunit β; γ, G protein subunit γ; AC, adenylyl cyclase; PLC, phospholipase C.