The prevalence of asthma continues to increase. Asthma is caused by a Th2 cell–driven immune response. Its optimal treatment remains a challenge, and a sufficient immunotherapeutic approach to treating asthma has yet to be found. Using a murine asthma model, we show that a single injection of an anti-CD137 (4-1BB) mAb prevents the development of airway hyperreactivity, eosinophilic airway inflammation, excessive mucus production, and elevated IgE during the observation period of 7 weeks. Most importantly, even established disease is completely reversed by anti-CD137 mAb administration. The protection is associated with markedly reduced Th2 cytokine production and increased secretion of the Th1 cytokine IFN-γ. While B lymphocytes are partly depleted, the number of CD8+ T cells is increased. Blockade of IFN-γ and depletion of CD8+ T cells during treatment with anti-CD137 mAb reduces in part but does not abrogate the protective effect of CD137 mAb. In contrast, CD137 mAb–mediated CD4+ T cell anergy is critical for the observed effects, since transfer of CD4+ T cells from CD137 mAb–treated mice conveyed protection. These data demonstrate, for the first time to our knowledge, the capacity of anti-CD137 mAb to ameliorate allergic asthma, and they indicate CD137 as a possible target for therapeutic intervention in this disease. 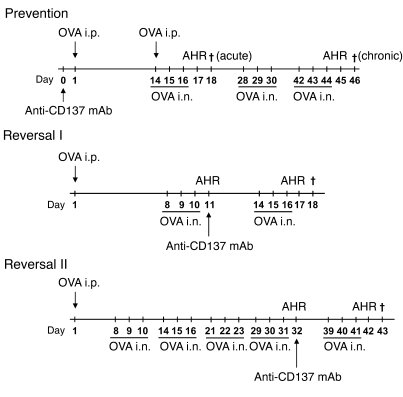