Morphogenesis of the right ventricle requires myocardial expression of Gata4

Morphogenesis of the right ventricle requires myocardial expression of Gata4

Mutations in developmental regulatory genes have been found to be responsible for some cases of congenital heart defects. One such regulatory gene is Gata4, a zinc finger transcription factor. In order to circumvent the early embryonic lethality of Gata4-null embryos and to investigate the role of myocardial Gata4 expression in cardiac development, we used Cre/loxP technology to conditionally delete Gata4 in the myocardium of mice at an early and a late time point in cardiac morphogenesis. Early deletion of Gata4 by Nkx2-5Cre resulted in hearts with striking myocardial thinning, absence of mesenchymal cells within the endocardial cushions, and selective hypoplasia of the RV. RV hypoplasia was associated with downregulation of Hand2, a transcription factor previously shown to regulate formation of the RV. Cardiomyocyte proliferation was reduced, with a greater degree of reduction in the RV than in the LV. Late deletion of Gata4 by Cre recombinase driven by the α myosin heavy chain promoter did not selectively affect RV development or generation of endocardial cushion mesenchyme but did result in marked myocardial thinning with decreased cardiomyocyte proliferation, as well as double-outlet RV. Our results demonstrate a general role of myocardial Gata4 in regulating cardiomyocyte proliferation and a specific, stage-dependent role in regulating the morphogenesis of the RV and the atrioventricular canal. 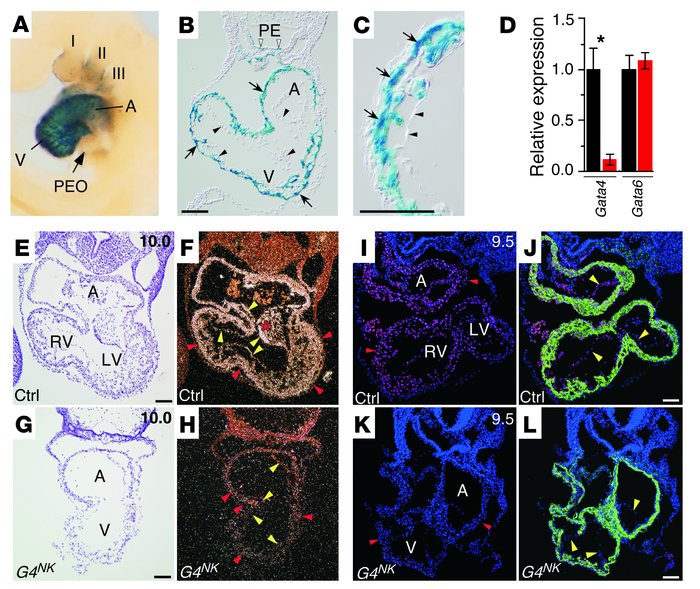 Early cardiomyocyte-restricted inactivation of Gata4 by Nkx2-5Cre. (–) The spatial pattern of recombination driven by Nkx2-5Cre was determined using the R26RstoplacZ reporter. X-gal–stained E9.5 embryos were examined in whole-mount () or in transverse sections ( and ). Strong staining was detected in cardiomyocytes (arrows, and ) of the atrium (A) and ventricle (V). Weaker activity was detected in the branchial arch (I–III), epithelium, and pharyngeal endoderm (PE). No Cre activity was detected in the proepicardial organ (PEO) or endocardium (arrowheads). () Efficient inactivation of Gata4 by Nkx2-5Cre. Gata4 and Gata6 expression was measured by qRT-PCR in RNA isolated from hearts of E9.5 control (Gata4flox/flox, black bars) or G4NK embryos (red bars). Gata4 expression was downregulated in G4NK embryos compared with that of controls (n = 3; *P < 0.05). (–) In situ hybridization for Gata4. Gata4 expression was robust in myocardium (red arrowheads), endocardium (yellow arrowheads), and endocardial cushions (asterisk) of control embryos ( and ) but was not detectable in G4NK embryos ( and ). Shown are brightfield ( and ) and darkfield views ( and ). (–) Immunofluorescent detection of Gata4 in control ( and ) and G4NK embryos ( and ). Gata4 staining was strongly reduced in cardiomyocytes (red arrowheads) and endocardial cells (yellow arrowheads) of G4NK embryos. and show the same field as and , with the addition of green labeling of cardiomyocytes (desmin). Red staining indicates Gata4; blue staining denotes nuclei; purple staining indicates colocalization of Gata4 in the nucleus. Original magnification, ×40 (). Scale bars: 100 μm (, , and –).