Expression of voltage-gated K+ channel, shaker-related subfamily, member 5 (KCNA5) underlies the human atrial ultra-rapid delayed rectifier K+ current (IKur). The KCNA5 polymorphism resulting in P532L in the C terminus generates IKur that is indistinguishable from wild type at baseline but strikingly resistant to drug block. In the present study, truncating the C terminus of KCNA5 generated a channel with wild-type drug sensitivity, which indicated that P532 is not a drug-binding site. Secondary structure prediction algorithms identified a probable α-helix in P532L that is absent in wild-type channels. We therefore assessed drug sensitivity of IKur generated in vitro in CHO and HEK cells by channels predicted to exhibit or lack this C-terminal α-helix. All constructs displayed near-identical IKur in the absence of drug challenge. However, those predicted to lack the C-terminal α-helix generated quinidine-sensitive currents (43–51% block by 10 μM quinidine), while the currents generated by those constructs predicted to generate a C-terminal α-helix were inhibited less than 12%. Circular dichroism spectroscopy revealed an α-helical signature with peptides derived from drug-resistant channels and no organized structure in those associated with wild-type drug sensitivity. In conclusion, we found that this secondary structure in the KCNA5 C terminus, absent in wild-type channels but generated by a naturally occurring DNA polymorphism, does not alter baseline currents but renders the channel drug resistant. Our data support a model in which this structure impairs access of the drug to a pore-binding site. 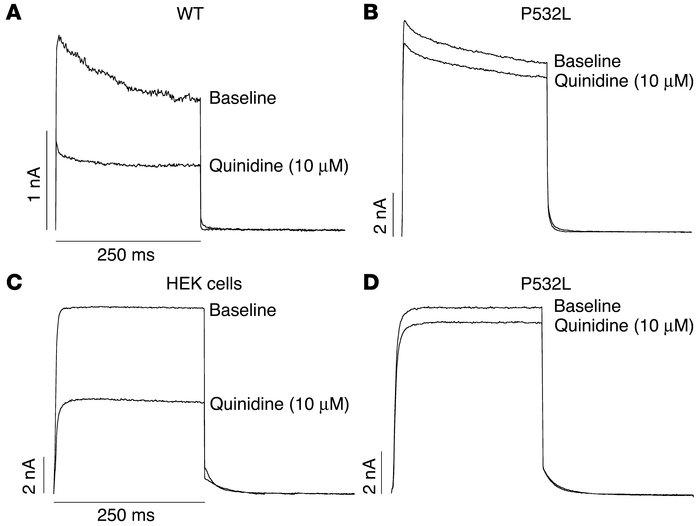