Recent evidence suggests that the heart possesses a greater regeneration capacity than previously thought. In the present study, we isolated undifferentiated precursors from the cardiac nonmyocyte cell population of neonatal hearts, expanded them in culture, and induced them to differentiate into functional cardiomyocytes. These cardiac precursors appear to express stem cell antigen–1 and demonstrate characteristics of multipotent precursors of mesodermal origin. Following infusion into normal recipients, these cells home to the heart and participate in physiological and pathophysiological cardiac remodeling. Cardiogenic differentiation in vitro and in vivo depends on FGF-2. Interestingly, this factor does not control the number of precursors but regulates the differentiation process. These findings suggest that, besides its angiogenic actions, FGF-2 could be used in vivo to facilitate the mobilization and differentiation of resident cardiac precursors in the treatment of cardiac diseases. 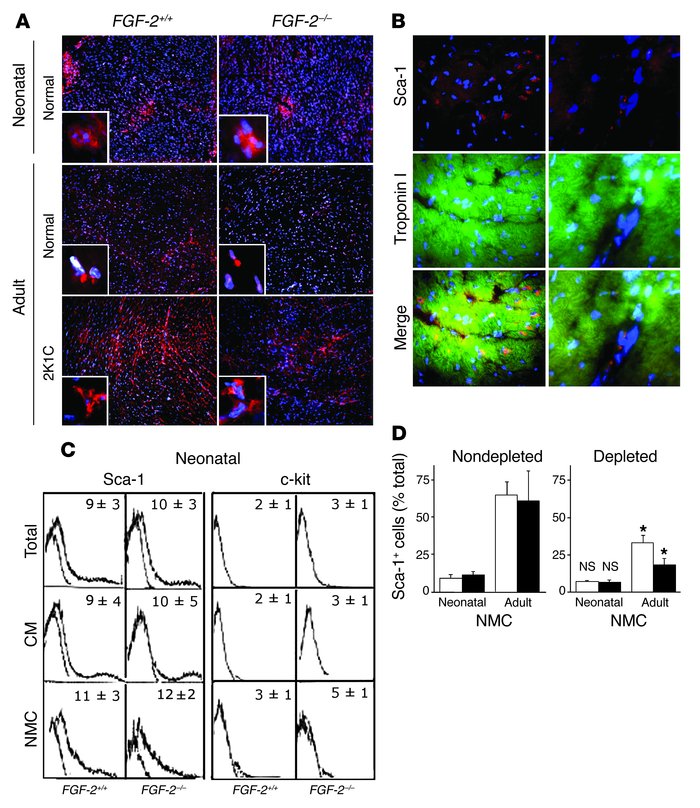 Sca-1 expression in cardiac tissues from WT () or FGF-2–deficient () mice. () Sca-1 immunostaining in heart sections from and neonatal and adult mice with or without renovascular hypertension and cardiac hypertrophy (2-kidney 1-clip model [2K1C]). Original magnification, ×20 and ×63 (insets). () Immunodetection of Sca-1 and troponin I in the hearts of adult mice. Original magnification, ×40 (left panels), ×63 (right panels). () Percentage of Sca-1+ and c-kit+ cells as determined by FACS analysis in total heart cells (Total) and in the cardiomyocyte (CM) and nonmyocyte cell (NMC) fractions from and mice ( = 5). () Percentage of Sca-1+ cells as determined by FACS analysis in neonatal or adult NMCs isolated from (white bars) and mice (black bars). NMCs were either depleted or not depleted of cells expressing CD45, CD31, CD34, Flk-1, CD3, CD4, CD8, B220, TER119, Mac-1, and Gr-1. * < 0.05; NS, not significant as compared with the corresponding nondepleted group; = 3–6.