An integrated view of suppressor T cell subsets in immunoregulation

An integrated view of suppressor T cell subsets in immunoregulation

The immune system evolved to protect organisms from a virtually infinite variety of disease-causing agents but to avoid harmful responses to self. Because immune protective mechanisms include the elaboration of potent inflammatory molecules, antibodies, and killer cell activation — which together can not only destroy invading microorganisms, pathogenic autoreactive cells, and tumors, but also mortally injure normal cells — the immune system is inherently a “double-edged sword” and must be tightly regulated. Immune response regulation includes homeostatic mechanisms intrinsic to the activation and differentiation of antigen-triggered immunocompetent cells and extrinsic mechanisms mediated by suppressor cells. This review series will focus on recent advances indicating that distinct subsets of regulatory CD4+ and CD8+ T cells as well as NK T cells control the outgrowth of potentially pathogenic antigen-reactive T cells and will highlight the evidence that these suppressor T cells may play potentially important clinical roles in preventing and treating immune-mediated disease. Here we provide a historical overview of suppressor cells and the experimental basis for the existence of functionally and phenotypically distinct suppressor subsets. Finally, we will speculate on how the distinct suppressor cell subsets may function in concert to regulate immune responses. 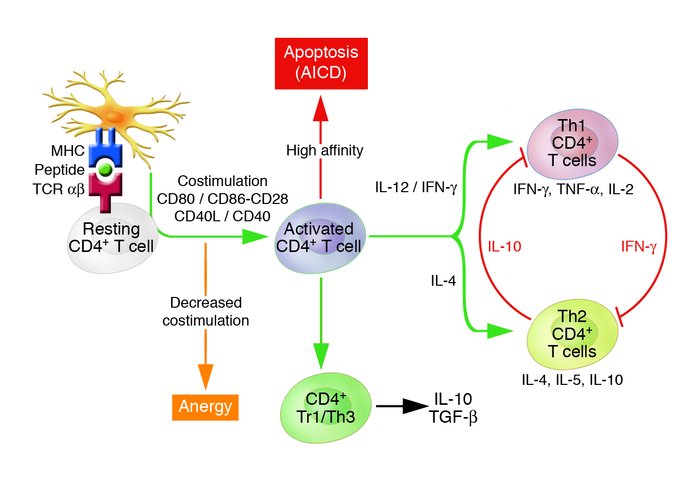 Homeostatic control of the outgrowth of antigen-activated CD4+ T cells. Control of the peripheral immunity is accomplished by mechanisms intrinsic to antigen activation of CD4+ T cells; including apoptosis, induction of anergy, and differentiation into Th subsets that are independent of other types of regulatory cells. In addition, superimposed on these intrinsic mechanisms are control mechanisms mediated by distinct subsets of NKT, CD4+, and CD8+ regulatory (suppressor) T cells.