Adam’s curse A future without men 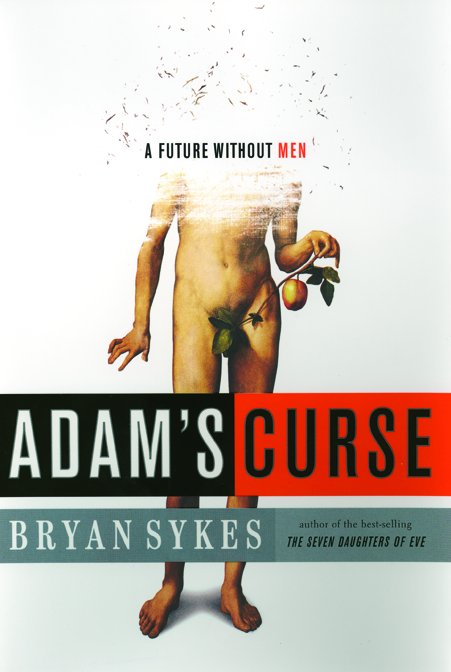 Genghis Khan attacks a village, slaughters its men, and rapes its women. He and his four acknowledged sons do the same throughout Asia as they build their empire. According to Bryan Sykes’s book Adam’s curse: a future without men, this is “guy” behavior. Genetics corroborates part of this story: 8% of men in that region, roughly 16 million, now carry the same Y chromosome, and it’s presumably Genghis Khan’s.

The use of genetics to examine fragments of human history is the subject of about one-third of the book. Mitochondrial and Y-chromosomal markers are used to trace maternal and paternal lineages, respectively. Surprisingly, some real jaw-droppers are missing from this text: the Jeffersonian Y chromosome carried by one descendant of Sally Hemings (s1); the shared Y chromosome within the Jewish priesthood (s2, s3) — striking because it corroborates an early portion of the biblical narrative (s4) yet oddly absent given this book’s biblical title (by way of Yeats); the discovery of this same Y chromosome in a Bantu-speaking black African population (s5, s6); and the disputed finding of European Y-chromosomal markers in Indian Brahmins (s7-s9). These are reminiscent of Schliemann’s discovery of Troy — startling support for what had been relegated to myth or conjecture. They should have been in this book.

Another third of the book focuses on the history of the science of genetics. It’s nicely written, particularly regarding work on the likely origins and evolutionary advantages of sexual reproduction. I’d have preferred more illustrations and more attention to the false ideas that Darwin, Mendel, and others had to overcome. A related problem is the absence of Avery, MacCleod, and McCarty’s identification of DNA as the chemical of heredity, against all expectation that it would be protein or carbohydrate (s10). Why else would Watson, Crick, Franklin, and others care about DNA structure? But these are quibbles; the section is good.

Unfortunately, the third part of the book sinks it. It’s a hodgepodge of self-referential stories, amateurish poetic allegory, and overly gene-centric speculations that a lay reader might mistake for established fact. The chapter describing Sykes’s wonderment while isolating his own DNA is excruciating, and he correctly observes in a long discussion of his genealogy that other people’s family histories are “tedious.” Sykes hears chromosomes speaking to him; genes “want,” “observe,” and “plan” and are “happy,” “hostile,” or “pretty relaxed.”

Sykes postulates a harsh Darwinian struggle between feminine mitochondria and masculine Y chromosomes. Thus, mitochondria disable sperm, kill male fetuses, and make men gay, all to block masculine reproduction. There are plenty of scientific-sounding explanations for male homosexuality, and I have no objection to the idea that mitochondria might encode some predisposition. But wouldn’t it be better to find the gene before making the announcement?

Sykes argues that the “raging beast” of the Y chromosome is specifically responsible for poverty, global warming, industrial pollution, nuclear warheads, the Cuban missile crisis, and the conflict in the Middle East (even though both sides share Y chromosomes [ref. s11], which in a gene-centric model should argue for cooperation). Freud asked what women want; Sykes says it’s “wasteful displays of Ferrari and Rolex.” But a few chapters earlier, he claims that female preference for male intelligence drove our expanding brainpower. Later he writes that leaving the world entirely to women would diminish “greed and ambition.” So no woman would be guilty of insider trading (s12)? Or become a suicide bomber (s13)? No man would start a nonviolent protest movement (s14, s15)? What about humanity’s apparent preference for small families, once infant mortality is minimized and methods of contraception are widely available (s16, s17)?

And then there’s the alleged fragility of our Y chromosome. In 5,000 generations (125,000 years), men will lose 99% of their fertility, he says. Scientists used to predict that their work would have practical consequences within 5-10 years, but that turned out to be testable — and only rarely correct (s18, s19). How do we test Sykes’s assertion? Five thousand generations in a mouse is only about 1,000 years, but the mouse Y chromosome does not appear to be in accelerated danger. The same is the case with fruit flies, which generate even faster. His proposed solutions to our alleged problem include human germline engineering, but there is no serious discussion of the immense technical — and ethical — difficulties. We have not been able to engineer our germline just to cure sickle cell disease, even though its molecular basis has been known for more than half a century (s20). And constructing a virulent virus to destroy Y chromosomes “would not really be difficult to achieve.” No wonder lots of layfolk don’t trust us.

If your neurosis is about threats to masculinity, try Y: the last man, a comic book series about, literally, the last living man, who’s being hunted by a gang of lesbian Amazons (s21). In the real world, I wouldn’t worry. There’s a good book in here somewhere, but despite some fine sections, Adam’s curse: a future without men desperately needs an editor’s scalpel — plus a dose of common sense.