Amyloid β-peptide (Aβ) appears to play a key pathogenic role in Alzheimer disease (AD). Immune therapy in mouse models of AD via Aβ immunization or passive administration of Aβ antibodies markedly reduces Aβ levels and reverses behavioral impairment. However, a human trial of Aβ immunization led to meningoencephalitis in some patients and was discontinued. Here we show that nasal vaccination with a proteosome-based adjuvant that is well tolerated in humans plus glatiramer acetate, an FDA-approved synthetic copolymer used to treat multiple sclerosis, potently decreases Aβ plaques in an AD mouse model. This effect did not require the presence of antibody, as it was observed in B cell–deficient (Ig μ–null) mice. Vaccinated animals developed activated microglia that colocalized with Aβ fibrils, and the extent of microglial activation correlated strongly with the decrease in Aβ fibrils. Activation of microglia and clearing of Aβ occurred with the adjuvant alone, although to a lesser degree. Our results identify a novel approach to immune therapy for AD that involves clearing of Aβ through the utilization of compounds that have been safely tested on or are currently in use in humans. 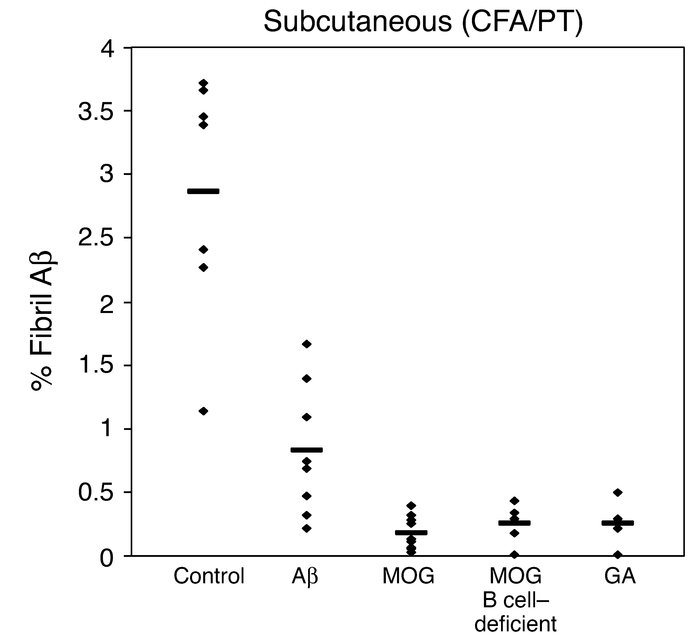 Effect of subcutaneous immunization on fibril Aβ levels in the brain. To measure Aβ fibrils, the left hemisphere of each mouse was cut into 14-μm longitudinal sections and stained with thioflavin S. Multiple sections from the identical regions were examined for each treatment group. The quantification was performed in a blinded fashion using Imaging Research software from the NIH. < 0.01, Aβ versus control; < 0.001, MOG, MOG B cell–deficient, and GA versus control.