Pulmonary arterial hypertension (PAH) is characterized by genetic and acquired abnormalities that suppress apoptosis and enhance cell proliferation in the vascular wall, including downregulation of the bone morphogenetic protein axis and voltage-gated K+ (Kv) channels. Survivin is an “inhibitor of apoptosis” protein, previously thought to be expressed primarily in cancer cells. We found that survivin was expressed in the pulmonary arteries (PAs) of 6 patients with PAH and rats with monocrotaline-induced PAH, but not in the PAs of 3 patients and rats without PAH. Gene therapy with inhalation of an adenovirus carrying a phosphorylation-deficient survivin mutant with dominant-negative properties reversed established monocrotaline-induced PAH and prolonged survival by 25%. The survivin mutant lowered pulmonary vascular resistance, RV hypertrophy, and PA medial hypertrophy. Both in vitro and in vivo, inhibition of survivin induced PA smooth muscle cell apoptosis, decreased proliferation, depolarized mitochondria, caused efflux of cytochrome c in the cytoplasm and translocation of apoptosis-inducing factor into the nucleus, and increased Kv channel current; the opposite effects were observed with gene transfer of WT survivin, both in vivo and in vitro. Inhibition of the inappropriate expression of survivin that accompanies human and experimental PAH is a novel therapeutic strategy that acts by inducing vascular mitochondria-dependent apoptosis. 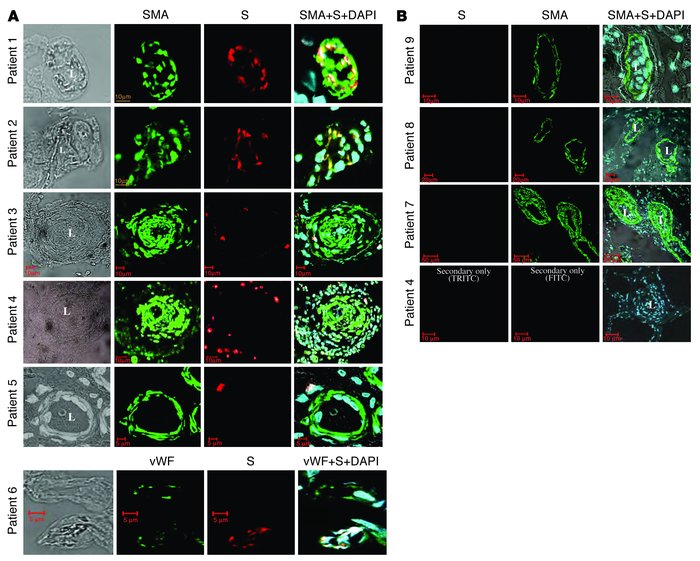 () Top: Immunofluorescence confocal microscopy shows survivin expression colocalizing with smooth muscle actin in the media of small and medium-sized PAs from 5 patients with PAH. In some cases (patients 3–5) survivin is expressed in cells both outside and inside the elastic lamina (evident by autofluorescence in patient 3). Bottom: In 2 small PAs shown from a PAH patient, survivin is also expressed; it colocalizes with vWF only in the bottom one, which appears to be more remodeled and have an almost obliterated lumen. () Survivin is not expressed in the PAs of 3 patients without PAH (patients 8 and 9; patient 10 not shown). Despite the significant medial hypertrophy shown in patient 7, due to thromboembolic pulmonary hypertension, there is a compete lack of survivin expression, suggesting that it is not a nonspecific feature of the remodeling process. Lack of nonspecific staining by the secondary antibodies in patient 4 is shown in the bottom; this was the case in all the patients shown here. SMA, smooth muscle actin; S, survivin; L, lumen.