Current models of T cell memory implicate a critical role for IL-7 in the effector-to-memory transition, raising the possibility that IL-7 therapy might enhance vaccine responses. IL-7 has not been studied, to our knowledge, before now for adjuvant activity. We administered recombinant human IL-7 (rhIL-7) to mice during immunization against the male antigen HY and compared these results with those obtained from mice immunized with rhIL-2 and rhIL-15. Administration of rhIL-7 or rhIL-15, but not rhIL-2, increased effector cells directed against these dominant antigens and dramatically enhanced CD8+ effectors to subdominant antigens. The mechanisms by which the cytokines augmented effector pool generation were multifactorial and included rhIL-7–mediated costimulation and rhIL-15–mediated augmentation of the proliferative burst. The contraction phase of the antigen-specific response was exaggerated in cytokine-treated mice; however, CD8+ memory pools in rhIL-7– or rhIL-15–treated groups demonstrated superior long-term survival resulting in quantitative advantages that remained long after the cytokines were discontinued, as demonstrated by improved survival after challenge with an HY-expressing tumor undertaken several weeks after cytokine cessation. These results confirm the adjuvant activity of rhIL-15 and demonstrate that rhIL-7 also serves as a potent vaccine adjuvant that broadens immunity by augmenting responses to subdominant antigens and improving the survival of the CD8+ T cell memory pool. 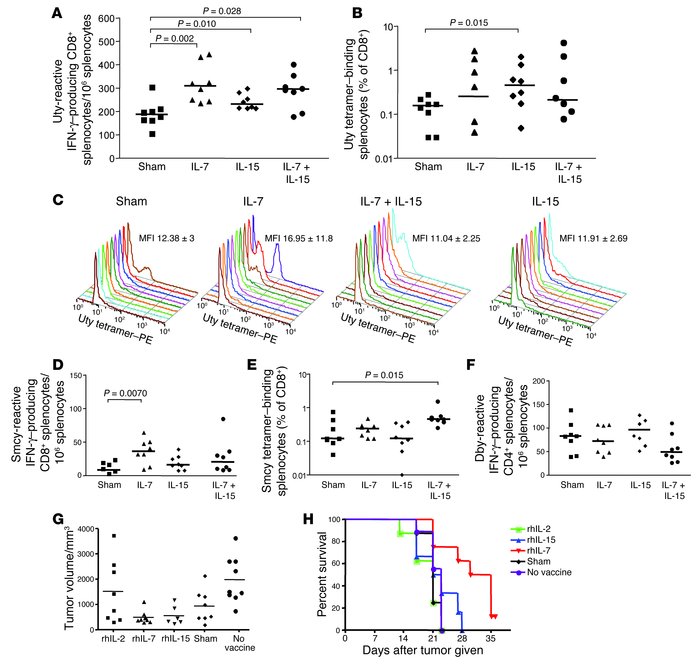 Administration of rhIL-7 or rhIL-15 with immunization results in long-term expansion of the memory pool. (–) Animals (n = 8 per group) were immunized (days 0, 14, 28, and 42) and treated with cytokines or carrier from days 0–27, then allowed to rest until day 120. Frequency of splenocytes producing IFN-γ in response to Uty () and binding Uty tetramers (). () Uty tetramer–binding cells were electronically gated as described in Figure D. Each panel shows colored histograms from 9 individual mice in each group. No significant differences in tetramer binding, as measured by MFI, were seen between groups. Frequency of splenocytes producing IFN-γ in response to Smcy () and binding Smcy tetramers (). () Frequency of cells producing IFN-γ in response to Dby. ( and ) Animals were immunized on day 0 and treated with cytokines from days 0–27. On day 60, groups were challenged with 3 × 106 MB49 tumor cells, then were euthanized when tumor progression met NCI Animal Care and Use guidelines. () Mean tumor volume 21 days after tumor challenge. () Overall survival is shown. There is significantly prolonged survival for rhIL-7 compared with all groups (versus vaccine alone, P = 0.0029; versus IL-2, P = 0.002; versus no vaccine, P = 0.008; versus rhIL-15, P = 0.02).