Intrarenal cells, not bone marrow–derived cells, are the major source for regeneration in postischemic kidney

Intrarenal cells, not bone marrow–derived cells, are the major source for regeneration in postischemic kidney

Ischemic injury to the kidney produces acute tubular necrosis and apoptosis followed by tubular regeneration and recovery of renal function. Although mitotic cells are present in the tubules of postischemic kidneys, the origins of the proliferating cells are not known. Bone marrow cells (BMCs) can differentiate across lineages to repair injured organs, including the kidney. However, the relative contribution of intrarenal cells and extrarenal cells to kidney regeneration is not clear. We produced transgenic mice that expressed enhanced GFP (EGFP) specifically and permanently in mature renal tubular epithelial cells. Following ischemia/reperfusion injury (IRI), EGFP-positive cells showed incorporation of BrdU and expression of vimentin, which provides direct evidence that the cells composing regenerating tubules are derived from renal tubular epithelial cells. In BMC-transplanted mice, 89% of proliferating epithelial cells originated from host cells, and 11% originated from donor BMCs. Twenty-eight days after IRI, the kidneys contained 8% donor-derived cells, of which 8.4% were epithelial cells, 10.6% were glomerular cells, and 81% were interstitial cells. No renal functional improvement was observed in mice that were transplanted with exogenous BMCs. These results show that intrarenal cells are the main source of renal repair, and a single injection of BMCs does not make a significant contribution to renal functional or structural recovery. 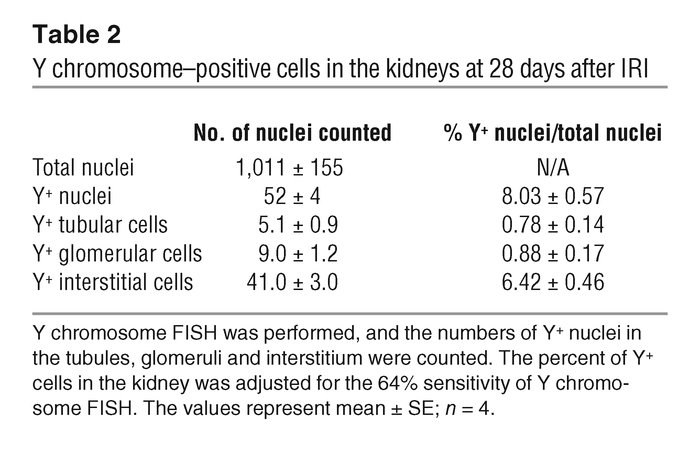