Evidence suggests that Alzheimer disease (AD) begins as a disorder of synaptic function, caused in part by increased levels of amyloid β-peptide 1–42 (Aβ42). Both synaptic and cognitive deficits are reproduced in mice double transgenic for amyloid precursor protein (AA substitution K670N,M671L) and presenilin-1 (AA substitution M146V). Here we demonstrate that brief treatment with the phosphodiesterase 4 inhibitor rolipram ameliorates deficits in both long-term potentiation (LTP) and contextual learning in the double-transgenic mice. Most importantly, this beneficial effect can be extended beyond the duration of the administration. One course of long-term systemic treatment with rolipram improves LTP and basal synaptic transmission as well as working, reference, and associative memory deficits for at least 2 months after the end of the treatment. This protective effect is possibly due to stabilization of synaptic circuitry via alterations in gene expression by activation of the cAMP-dependent protein kinase (PKA)/cAMP regulatory element–binding protein (CREB) signaling pathway that make the synapses more resistant to the insult inflicted by Aβ. Thus, agents that enhance the cAMP/PKA/CREB pathway have potential for the treatment of AD and other diseases associated with elevated Aβ42 levels. 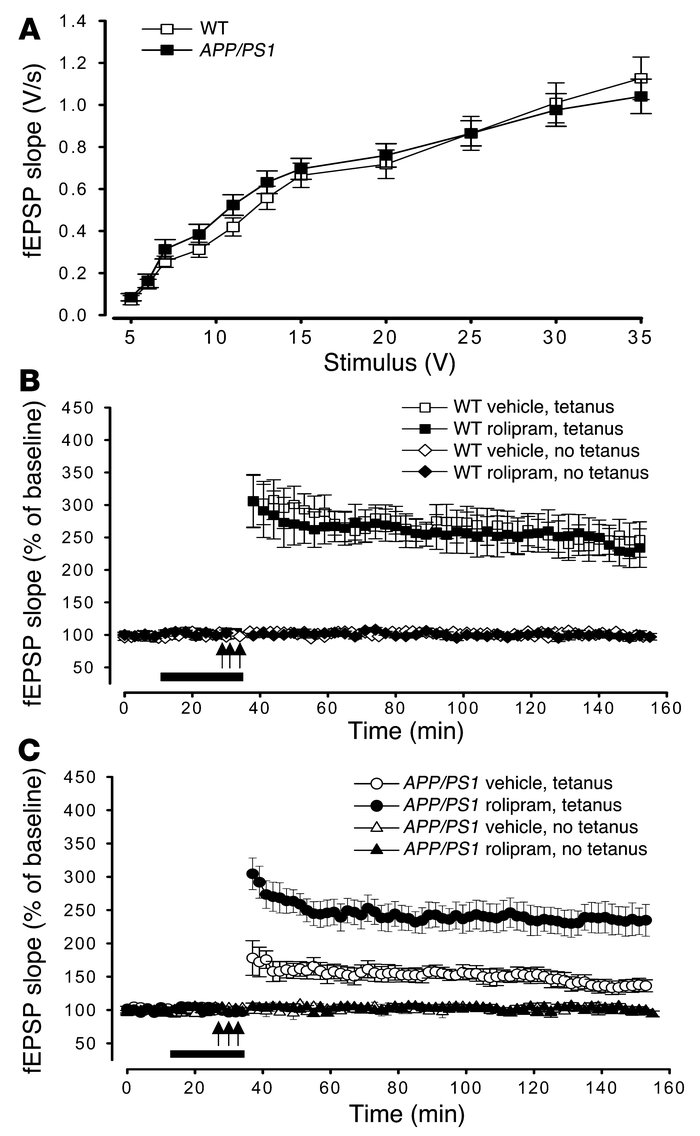 Rolipram reverses the impairment of L-LTP in the CA1 region of slices from 3-month-old mice. () BST is similar in 3-month-old animals and WT littermates. Summary graph of field input-output relationship for different stimulation intensities (5_35 V) [F(1, 44) = 0.091, > 0.05]. () Summary graph showing that 20 minutes of treatment with rolipram does not affect L-LTP and baseline transmission in WT mice [F(1, 26) = 0.87, > 0.05]. () Summary graph showing that rolipram abrogates L-LTP impairment in mice without affecting basal neurotransmission. These experiments were interleaved with those of WT mice [F(1, 23) = 12.48, < 0.001]. Arrows indicate time and pattern of the tetani.