Infantile cortical hyperostosis (Caffey disease) is characterized by spontaneous episodes of subperiosteal new bone formation along 1 or more bones commencing within the first 5 months of life. A genome-wide screen for genetic linkage in a large family with an autosomal dominant form of Caffey disease (ADC) revealed a locus on chromosome 17q21 (LOD score, 6.78). Affected individuals and obligate carriers were heterozygous for a missense mutation (3040C↠T) in exon 41 of the gene encoding the α1(I) chain of type I collagen (COL1A1), altering residue 836 (R836C) in the triple-helical domain of this chain. The same mutation was identified in affected members of 2 unrelated, smaller families with ADC, but not in 2 prenatal cases and not in more than 300 chromosomes from healthy individuals. Fibroblast cultures from an affected individual produced abnormal disulfide-bonded dimeric α1(I) chains. Dermal collagen fibrils of the same individual were larger, more variable in shape and size, and less densely packed than those in control samples. Individuals bearing the mutation, whether they had experienced an episode of cortical hyperostosis or not, had joint hyperlaxity, hyperextensible skin, and inguinal hernias resembling symptoms of a mild form of Ehlers-Danlos syndrome type III. These findings extend the spectrum of COL1A1-related diseases to include a hyperostotic disorder. 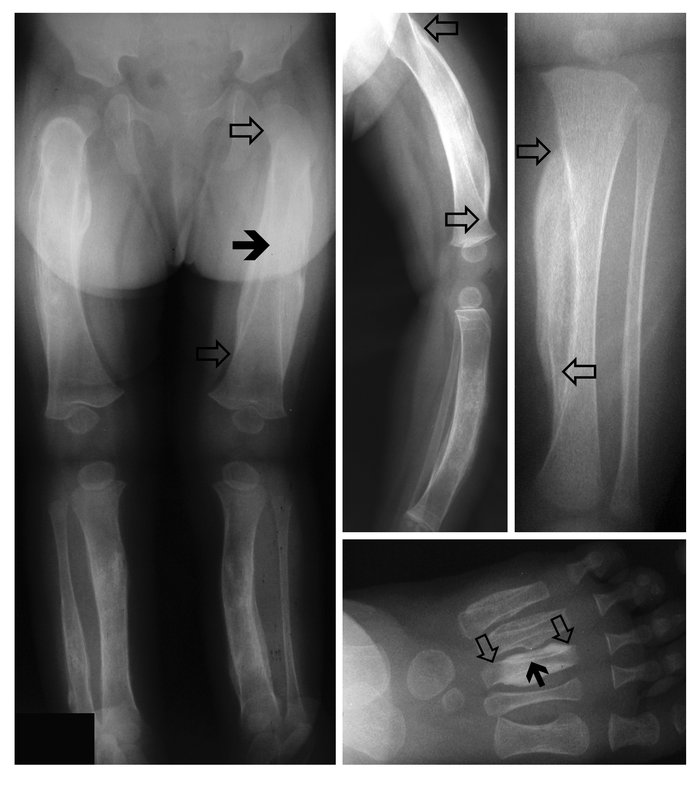 Radiographic features of infantile cortical hyperostosis. Radiographs of 3 affected individuals of 2 unrelated kindreds showing subperiosteal thickening of the femur, tibia, and fibula (left and upper middle panels: tibia and fibula, respectively, of twin II-1 of family 3; upper right panel: fibula of patient II-1 of family 2), and metacarpals of the left foot (lower right panel: twin II-2 of family 3). Note that the periosteum, which is normally anchored at the growth plates where it is continuous with the perichondrium, was frequently elevated circumferentially from the proximal to the distal growth plates (open arrows). The bone marrow cavities were also narrowed (filled arrows).