Adenosine is a signaling nucleoside that has been implicated in the regulation of asthma and chronic obstructive pulmonary disease. Adenosine signaling can serve both pro- and anti-inflammatory functions in tissues and cells. In this study we examined the contribution of A1 adenosine receptor (A1AR) signaling to the pulmonary inflammation and injury seen in adenosine deaminase–deficient (ADA-deficient) mice, which exhibit elevated adenosine levels. Experiments revealed that transcript levels for the A1AR were elevated in the lungs of ADA-deficient mice, in which expression was localized predominantly to alveolar macrophages. Genetic removal of the A1AR from ADA-deficient mice resulted in enhanced pulmonary inflammation along with increased mucus metaplasia and alveolar destruction. These changes were associated with the exaggerated expression of the Th2 cytokines IL-4 and IL-13 in the lungs, together with increased expression of chemokines and matrix metalloproteinases. These findings demonstrate that the A1AR plays an anti-inflammatory and/or protective role in the pulmonary phenotype seen in ADA-deficient mice, which suggests that A1AR signaling may serve to regulate the severity of pulmonary inflammation and remodeling seen in chronic lung diseases by controlling the levels of important mediators of pulmonary inflammation and damage. 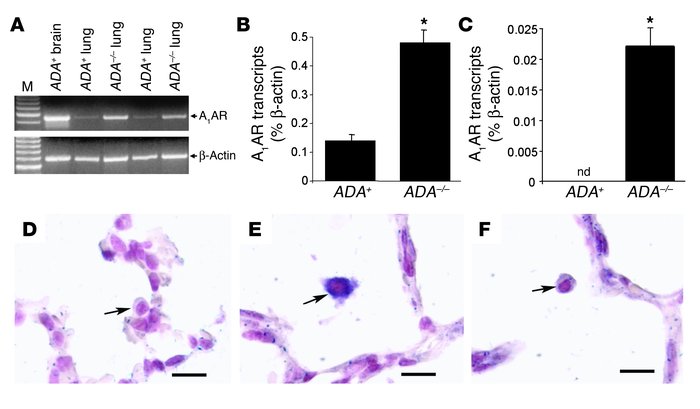