Role of leptin and melanocortin signaling in uremia-associated cachexia

Role of leptin and melanocortin signaling in uremia-associated cachexia

The pathogenesis of cachexia in patients with uremia is unknown. We tested the hypothesis that uremia-associated cachexia is caused by leptin signaling through the hypothalamic melanocortin receptor 4 (MC4-R). We performed either subtotal nephrectomy (N) or sham operations in WT, leptin receptor–deficient (db/db), and MC4-R knockout (MC4-RKO) mice. The animals were on 17% protein diets, and none of the uremic animals were acidotic. WT-N mice produced a classic syndrome of cachexia characterized by decreased food intake, increased metabolic rate, and loss of lean body mass. Corrected leptin levels were elevated. db/db mice and MC4-RKO mice resisted the cachexic effects of uremia on weight gain, body composition, and metabolic rate. Likewise, treatment of WT mice with intracranial agouti-related peptide reversed the cachexic effects of uremia on appetite, weight gain, body composition, and metabolic rate. Gene expression of ubiquitin C and proteasome subunits C2, C3, and C9 was not changed in the uremic animals, suggesting that other pathways are involved in this model of nonacidotic uremic cachexia. The results of this study suggest that elevated circulating levels of cytokines such as leptin may be an important cause of uremia-associated cachexia via signaling through the central melanocortin system. 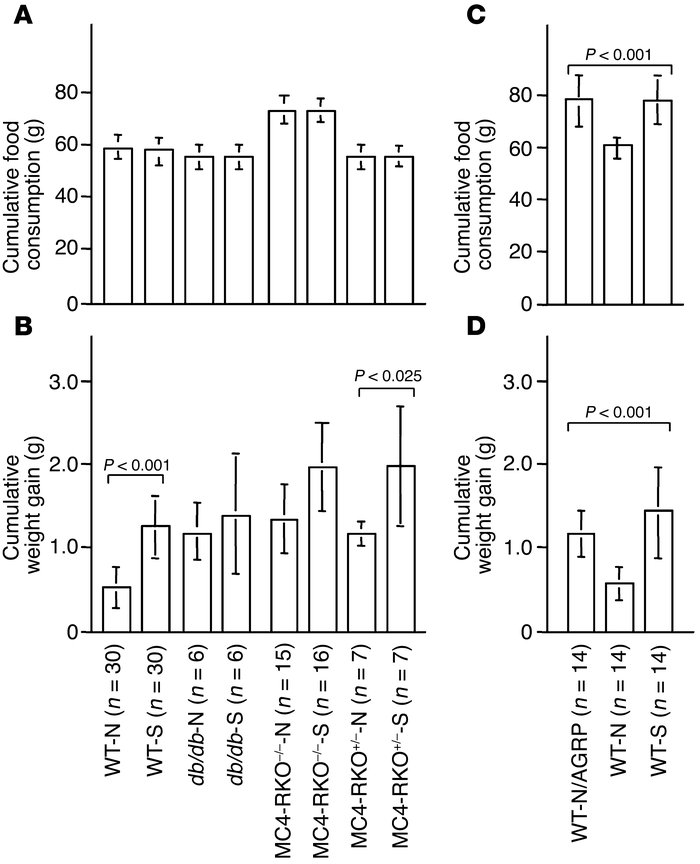