Nitrite represents a circulating and tissue storage form of NO whose bioactivation is mediated by the enzymatic action of xanthine oxidoreductase, nonenzymatic disproportionation, and reduction by deoxyhemoglobin, myoglobin, and tissue heme proteins. Because the rate of NO generation from nitrite is linearly dependent on reductions in oxygen and pH levels, we hypothesized that nitrite would be reduced to NO in ischemic tissue and exert NO-dependent protective effects. Solutions of sodium nitrite were administered in the setting of hepatic and cardiac ischemia-reperfusion (I/R) injury in mice. In hepatic I/R, nitrite exerted profound dose-dependent protective effects on cellular necrosis and apoptosis, with highly significant protective effects observed at near-physiological nitrite concentrations. In myocardial I/R injury, nitrite reduced cardiac infarct size by 67%. Consistent with hypoxia-dependent nitrite bioactivation, nitrite was reduced to NO, S-nitrosothiols, N-nitros-amines, and iron-nitrosylated heme proteins within 1–30 minutes of reperfusion. Nitrite-mediated protection of both the liver and the heart was dependent on NO generation and independent of eNOS and heme oxygenase-1 enzyme activities. These results suggest that nitrite is a biological storage reserve of NO subserving a critical function in tissue protection from ischemic injury. These studies reveal an unexpected and novel therapy for diseases such as myocardial infarction, organ preservation and transplantation, and shock states. 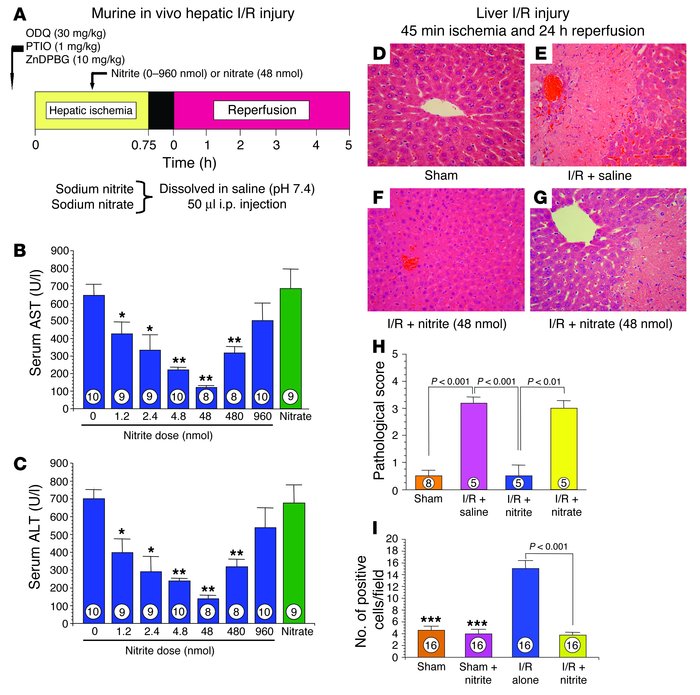