The long-term integrity of an articulating joint is dependent upon the nourishment of its cartilage component and the protection of the cartilage surface from friction-induced wear. Loss-of-function mutations in lubricin (a secreted glycoprotein encoded by the gene PRG4) cause the human autosomal recessive disorder camptodactyly-arthropathy-coxa vara-pericarditis syndrome (CACP). A major feature of CACP is precocious joint failure. In order to delineate the mechanism by which lubricin protects joints, we studied the expression of Prg4 mRNA during mouse joint development, and we created lubricin-mutant mice. Prg4 began to be expressed in surface chondrocytes and synoviocytes after joint cavitation had occurred and remained strongly expressed by these cells postnatally. Mice lacking lubricin were viable and fertile. In the newborn period, their joints appeared normal. As the mice aged, we observed abnormal protein deposits on the cartilage surface and disappearance of underlying superficial zone chondrocytes. In addition to cartilage surface changes and subsequent cartilage deterioration, intimal cells in the synovium surrounding the joint space became hyperplastic, which further contributed to joint failure. Purified or recombinant lubricin inhibited the growth of these synoviocytes in vitro. Tendon and tendon sheath involvement was present in the ankle joints, where morphologic changes and abnormal calcification of these structures were observed. We conclude that lubricin has multiple functions in articulating joints and tendons that include the protection of surfaces and the control of synovial cell growth. 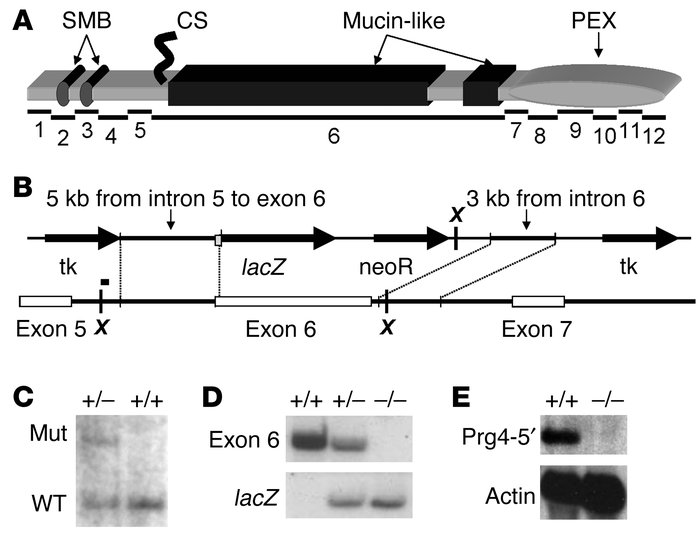 Lubricin structure and gene targeting in mice. () Schematic depicting the domain structure of lubricin and the portions encoded by each of the gene’s 12 coding exons. The amino-terminus is at the left and the carboxyl-terminus at the right. The amino-terminal portion contains 2 domains of 60% similarity to the somatomedin B (SMB) domains of vitronectin. Exons 2, 4, and 5 are subject to alternative splicing. The mucin-like domain, encoded by exon 6, comprises 25 and 6 repeats of the sequences KEPAPTTT/P and XXTTTX, respectively. Carboxyl-terminal to the mucin-like domains is a hemopexin (PEX) domain, whose similarity with vitronectin is 50% and with several members of the matrix metalloproteinase family is 40%. CS, covalently linked chondroitin sulfate side chain. () The targeting construct was intended to create a lubricin–. β-gal fusion protein by substituting an in-frame coding sequence for exon 6. I sites (X) are marked. The site of the probe used to detect correct 5′ targeting is shown as a bar above the 5′ site. tk, thymidine kinase. () Southern blot demonstrating correct 5′ targeting in an ES cell clone (+/–) in contrast to a nontargeted clone (+/+) using a probe that was 5′ of the targeting arm that recognizes the wild-type allele as an 8-kb I fragment and the targeted mutant allele (Mut) as a 10.3-kb I fragment. () Probes derived from exon 6 and from , respectively confirming targeting by Southern blot in wild-type (+/+), heterozygous (+/–), and homozygous mutant (–/–) mice. () No transcript is detected in the mice that are homozygous for the targeted allele using a cDNA probe representing exons 1–3 (Prg4-5′), which is upstream of the targeted exon.