The intracellular signals that mediate skeletal muscle protein loss and functional deficits due to muscular disuse are just beginning to be elucidated. Previously we showed that the activity of an NF-κB–dependent reporter gene was markedly increased in unloaded muscles, and p50 and Bcl-3 proteins were implicated in this induction. In the present study, mice with a knockout of the p105/p50 (Nfkb1) gene are shown to be resistant to the decrease in soleus fiber cross-sectional area that results from 10 days of hindlimb unloading. Furthermore, the marked unloading-induced activation of the NF-κB reporter gene in soleus muscles from WT mice was completely abolished in soleus muscles from Nfkb1 knockout mice. Knockout of the B cell lymphoma 3 (Bcl3) gene also showed an inhibition of fiber atrophy and an abolition of NF-κB reporter activity. With unloading, fast fibers from WT mice atrophied to a greater extent than slow fibers. Resistance to atrophy in both strains of knockout mice was demonstrated clearly in fast fibers, while slow fibers from only the Bcl3–/– mice showed atrophy inhibition. The slow-to-fast shift in myosin isoform expression due to unloading was also abolished in both Nfkb1 and Bcl3 knockout mice. Like the soleus muscles, plantaris muscles from Nfkb1–/– and Bcl3–/– mice also showed inhibition of atrophy with unloading. Thus both the Nfkb1 and the Bcl3 genes are necessary for unloading-induced atrophy and the associated phenotype transition. 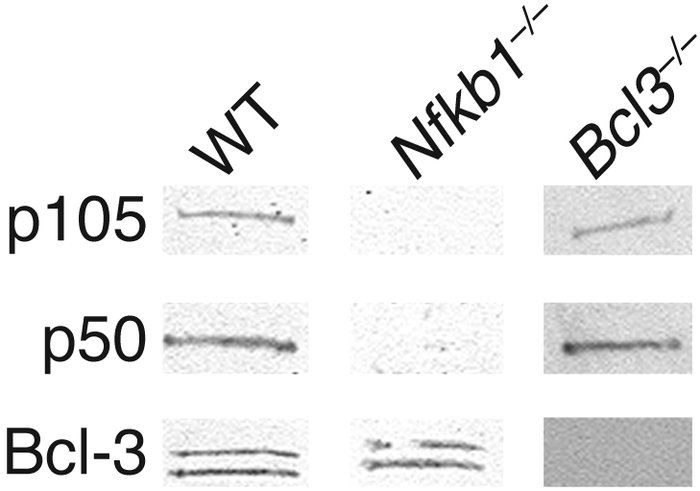