Inherited retinal degenerations afflict 1 in 3,500 individuals and are a heterogeneous group of diseases that result in profound vision loss, usually the result of retinal neuronal apoptosis. Atrophic changes in the retinal vasculature are also observed in many of these degenerations. While it is thought that this atrophy is secondary to diminished metabolic demand in the face of retinal degeneration, the precise relationship between the retinal neuronal and vascular degeneration is not clear. In this study we demonstrate that whenever a fraction of mouse or human adult bone marrow–derived stem cells (lineage-negative hematopoietic stem cells [Lin– HSCs]) containing endothelial precursors stabilizes and rescues retinal blood vessels that would ordinarily completely degenerate, a dramatic neurotrophic rescue effect is also observed. Retinal nuclear layers are preserved in 2 mouse models of retinal degeneration, rd1 and rd10, and detectable, albeit severely abnormal, electroretinogram recordings are observed in rescued mice at times when they are never observed in control-treated or untreated eyes. The normal mouse retina consists predominantly of rods, but the rescued cells after treatment with Lin– HSCs are nearly all cones. Microarray analysis of rescued retinas demonstrates significant upregulation of many antiapoptotic genes, including small heat shock proteins and transcription factors. These results suggest a new paradigm for thinking about the relationship between vasculature and associated retinal neuronal tissue as well as a potential treatment for delaying the progression of vision loss associated with retinal degeneration regardless of the underlying genetic defect. 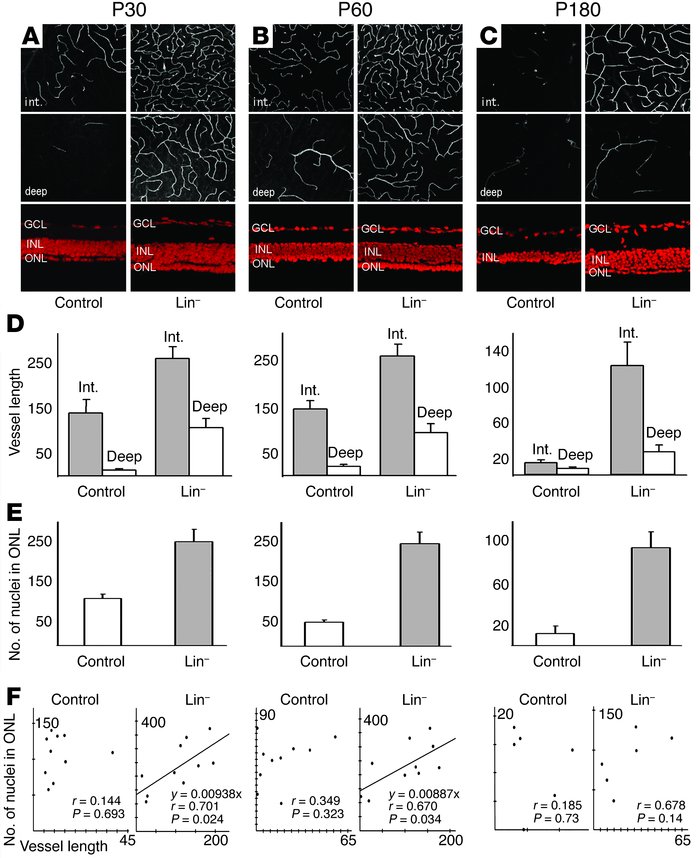