Cortical spreading depression (CSD) is a propagating wave of neuronal and glial depolarization and has been implicated in disorders of neurovascular regulation such as stroke, head trauma, and migraine. In this study, we found that CSD alters blood-brain barrier (BBB) permeability by activating brain MMPs. Beginning at 3–6 hours, MMP-9 levels increased within cortex ipsilateral to the CSD, reaching a maximum at 24 hours and persisting for at least 48 hours. Gelatinolytic activity was detected earliest within the matrix of cortical blood vessels and later within neurons and pia arachnoid (≥3 hours), particularly within piriform cortex; this activity was suppressed by injection of the metalloprotease inhibitor GM6001 or in vitro by the addition of a zinc chelator (1,10-phenanthroline). At 3–24 hours, immunoreactive laminin, endothelial barrier antigen, and zona occludens-1 diminished in the ipsilateral cortex, suggesting that CSD altered proteins critical to the integrity of the BBB. At 3 hours after CSD, plasma protein leakage and brain edema developed contemporaneously. Albumin leakage was suppressed by the administration of GM6001. Protein leakage was not detected in MMP-9–null mice, implicating the MMP-9 isoform in barrier disruption. We conclude that intense neuronal and glial depolarization initiates a cascade that disrupts the BBB via an MMP-9–dependent mechanism. 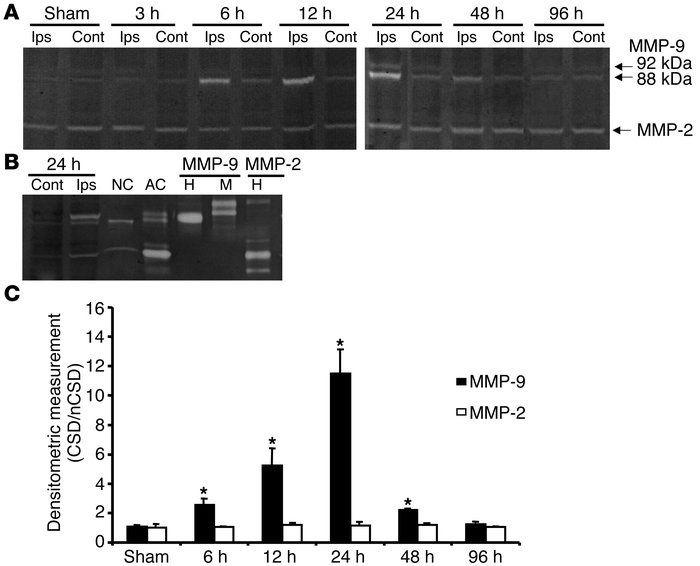 CSD caused time-dependent increases in MMP-9 levels, as assessed by gelatin gel zymography. Unilateral CSD was elicited by pinprick in the frontal cortex as described (see Methods). () MMP-9 gelatinolytic activity was consistently higher on the CSD side from 6 to 48 hours and returned to basal levels by 96 hours. The molecular weights of both bands corresponded to those of rat MMP-9 (92 kDa and 88 kDa). () Comparison of MMP-9 responses induced by CSD versus MMP-9 in conditioned media from rat cortical neuron (NC) and astrocyte (AC) cell cultures incubated with 100 nM phorbol myristate acetate (PMA) for 24 hours. 92 kDa recombinant human MMP-9 (H) and 105 kDa recombinant mouse MMP-9 (M) standards were also loaded as molecular weight markers. MMP-9 bands induced by CSD at 24 hours matched those obtained from neuron and astrocyte cultures. Ips, ipsilateral (CSD); Cont, contralateral (non-CSD). () Densitometric measurements confirm the increase in MMP-9 induced by CSD. Constitutive MMP-2 expression and activity did not change after CSD and were visualized in sham as well. nCSD, non-CSD. * < 0.05 compared with the contralateral side.