The regulation of insulin secretion by pancreatic β cells is perturbed in several diseases, including adult-onset (type 2) diabetes and persistent hyperinsulinemic hypoglycemia of infancy (PHHI). The first mouse model for PHHI has a conditional deletion of the gene encoding the winged-helix transcription factor Foxa2 (Forkhead box a2, formerly Hepatocyte nuclear factor 3β) in pancreatic β cells. Using isolated islets, we found that Foxa2 deficiency resulted in excessive insulin release in response to amino acids and complete loss of glucose-stimulated insulin secretion. Most PHHI cases are associated with mutations in SUR1 (Sulfonylurea receptor 1) or KIR6.2 (Inward rectifier K+ channel member 6.2), which encode the subunits of the ATP-sensitive K+ channel, and RNA in situ hybridization of mutant mouse islets revealed that expression of both genes is Foxa2 dependent. We utilized expression profiling to identify additional targets of Foxa2. Strikingly, one of these genes, Hadhsc, encodes short-chain L-3-hydroxyacyl-coenzyme A dehydrogenase, deficiency of which has been shown to cause PHHI in humans. Hadhsc is a direct target of Foxa2, as demonstrated by cotransfection as well as in vivo chromatin immunoprecipitation experiments using isolated islets. Thus, we have established Foxa2 as an essential activator of genes that function in multiple pathways governing insulin secretion. 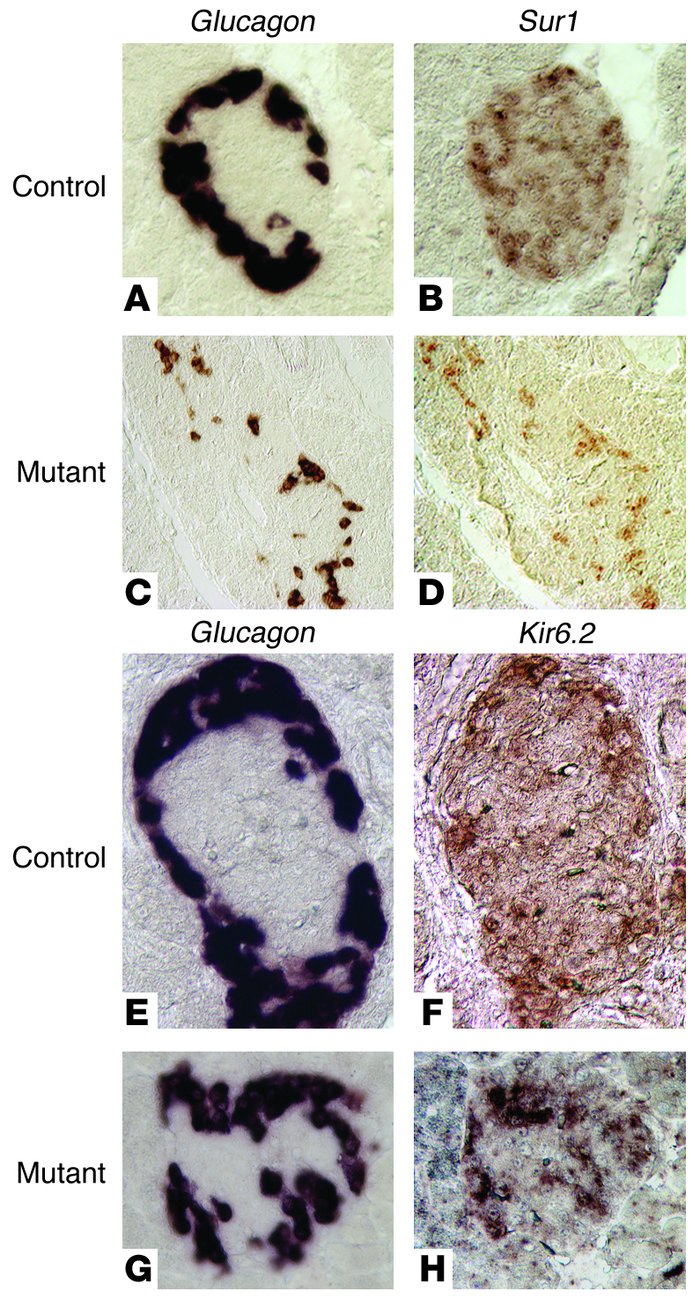 and mRNAs are undetected in -deficient β cells. (–) RNA in situ hybridization using paraffin-embedded pancreatic sections and digoxigenin probes for , , and is expressed in the α cells on the perimeter of both control islets ( and ) and mutant loxP/loxP; Ins.Cre islets ( and ). () and () are expressed throughout control islets, but are confined to the α cells of loxP/loxP;Ins.Cre islets ( and ). Note the similar staining pattern between and both KATP subunits in mutant islets ( versus and versus ). Magnification, ×40 for all images.