Although inflammation and protease/antiprotease imbalance have been postulated to be critical in cigarette smoke–induced (CS-induced) emphysema, oxidative stress has been suspected to play an important role in chronic obstructive pulmonary diseases. Susceptibility of the lung to oxidative injury, such as that originating from inhalation of CS, depends largely on its upregulation of antioxidant systems. Nuclear factor, erythroid-derived 2, like 2 (Nrf2) is a redox-sensitive basic leucine zipper protein transcription factor that is involved in the regulation of many detoxification and antioxidant genes. Disruption of the Nrf2 gene in mice led to earlier-onset and more extensive CS-induced emphysema than was found in wild-type littermates. Emphysema in Nrf2-deficient mice exposed to CS for 6 months was associated with more pronounced bronchoalveolar inflammation; with enhanced alveolar expression of 8-oxo-7,8-dihydro-2′-deoxyguanosine, a marker of oxidative stress; and with an increased number of apoptotic alveolar septal cells — predominantly endothelial and type II epithelial cells — as compared with wild-type mice. Microarray analysis identified the expression of nearly 50 Nrf2-dependent antioxidant and cytoprotective genes in the lung that may work in concert to counteract CS-induced oxidative stress and inflammation. The responsiveness of the Nrf2 pathway may act as a major determinant of susceptibility to tobacco smoke–induced emphysema by upregulating antioxidant defenses and decreasing lung inflammation and alveolar cell apoptosis. 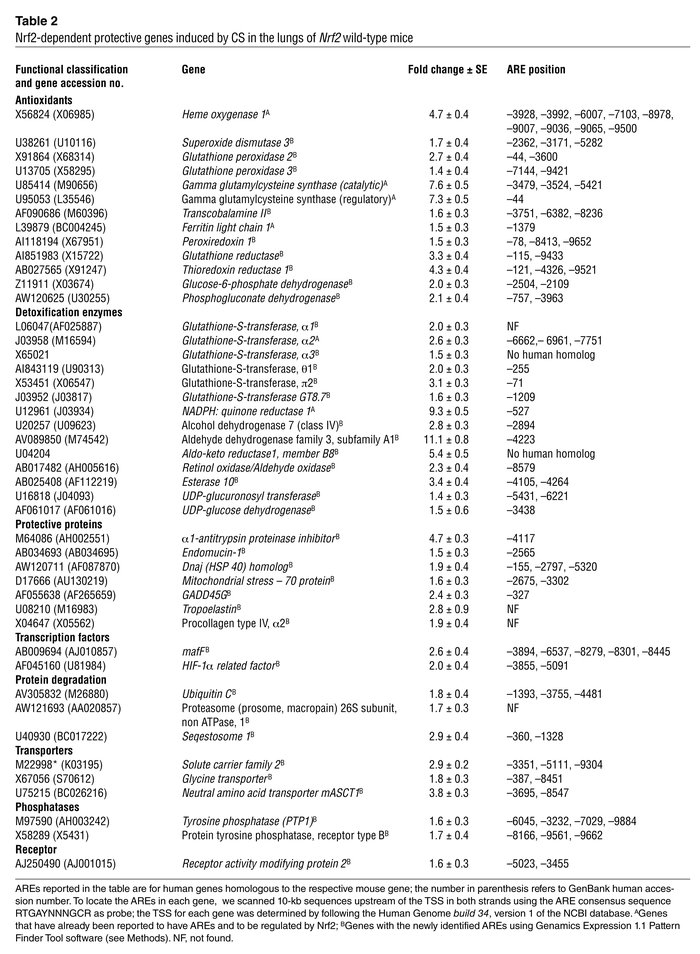