Retinitis pigmentosa (RP) is a clinically and genetically heterogeneous degenerative eye disease. Mutations at Arg135 of rhodopsin are associated with a severe form of autosomal dominant RP. This report presents evidence that Arg135 mutant rhodopsins (e.g., R135L, R135G, and R135W) are hyperphosphorylated and bind with high affinity to visual arrestin. Mutant rhodopsin recruits the cytosolic arrestin to the plasma membrane, and the rhodopsin-arrestin complex is internalized into the endocytic pathway. Furthermore, the rhodopsin-arrestin complexes alter the morphology of endosomal compartments and severely damage receptor-mediated endocytic functions. The biochemical and cellular defects of Arg135 mutant rhodopsins are distinct from those previously described for class I and class II RP mutations, and, hence, we propose that they be named class III. Impaired endocytic activity may underlie the pathogenesis of RP caused by class III rhodopsin mutations. 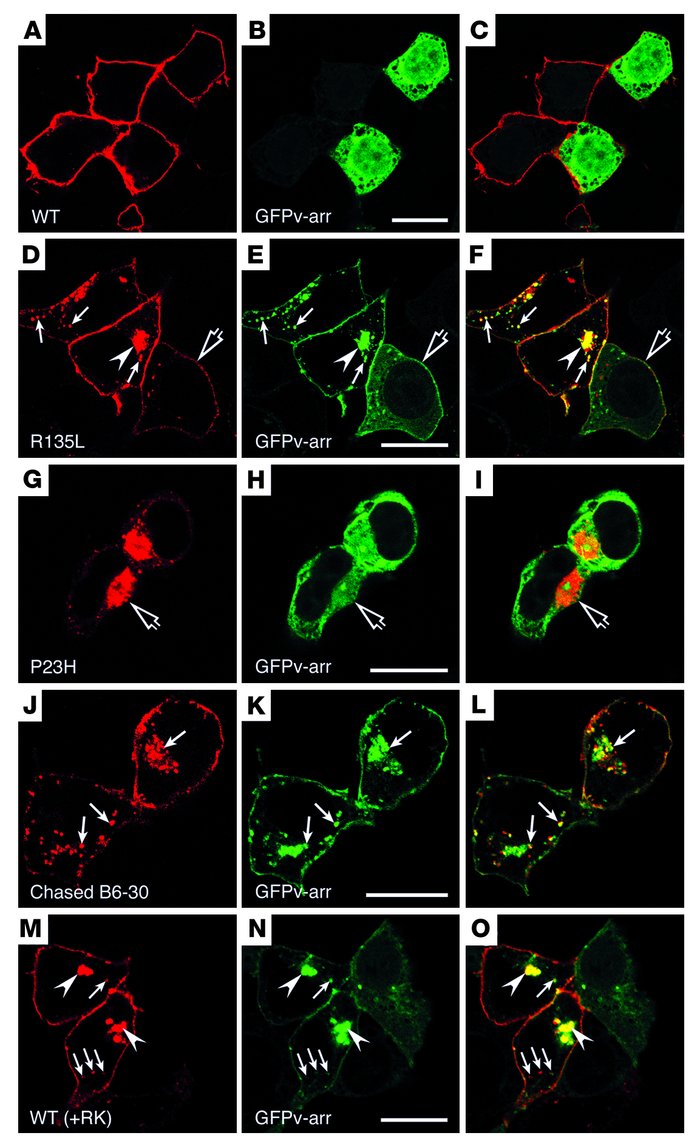 Subcellular distribution and trafficking of rhodopsin in HEK cells cotransfected with GFPv-arr. (–) Cells double transfected with GFPv-arr and either WT rhodopsin (–), R135L (–), or P23H (–) were immunolabeled for rhodopsin (red), and GFPv-arr was directly visualized by its GFP fluorescence. In –, some cells expressed low levels of R135L and contained both surface and cytosolic GFP signals (open arrows); the vesicular structures near the cell periphery (arrows) and the perinuclear structure (arrowheads) contain both the R135L and the GFPv-arr. In –, the P23H mutant–induced aggresomes (open arrows) are not enriched for GFPv-arr. (–) Live, R135L/GFPv-arr–transfected cells were incubated with mAb B6-30 at 4–C, followed by a 1-hour, 37–C chase. The cells were fixed and permeabilized, and the internalized rhodopsin was detected by the labeling of Alexa 594–anti-mouse Ab (red). Internalized surface rhodopsins appeared on GFPv-arr+ vesicle and perinuclear compartments (arrows). (–) Cells triple-transfected with WT-rhodopsin, RK, and GFPv-arr were fixed, permeabilized, and either immunolabeled with mAb B6-30 followed by Alexa 594–anti-mouse Ab () or directly visualized by GFP signals (). Phosphorylated WT rhodopsin was colocalized with GFPv-arr on the vesicles underneath PM (arrows) and the perinuclear compartments (arrowheads). A GFPv-arr–singly-transfected neighboring cell exhibited cytosolic green fluorescence. Scale bars: 20 μm.