Dermatitis herpetiformis (DH) is an autoimmune blistering skin disorder that is associated with gluten sensitivity. It presents as a papulovesicular rash and is often associated with enteropathy. The rash resolves when the patient is placed on a gluten-free diet and/or dapsone. DH, as well as celiac disease, is tightly associated with DQ2 and DQ8. A novel mouse model for DH is described that utilizes the NOD background and the HLA-DQ8 transgene. The addition of DQ8 contributes sensitivity to gliadin, and the addition of the NOD background contributes to autoimmunity and pathogenesis. Fifteen NOD DQ8+ mice of 90 that were sensitized to gluten developed blistering pathology similar to that seen in DH. Neutrophil infiltration of the dermis, deposition of IgA at the dermal-epidermal junction, and a complete reversal of the blistering phenomenon with the administration of a gluten-free diet with or without dapsone were observed. None of the 3 blistering mice examined had small-bowel pathology. This animal model of DH will be useful to determine the specificity of the IgA deposits, as well as the pathogenic mechanisms that occur in the skin as a result of gluten ingestion. 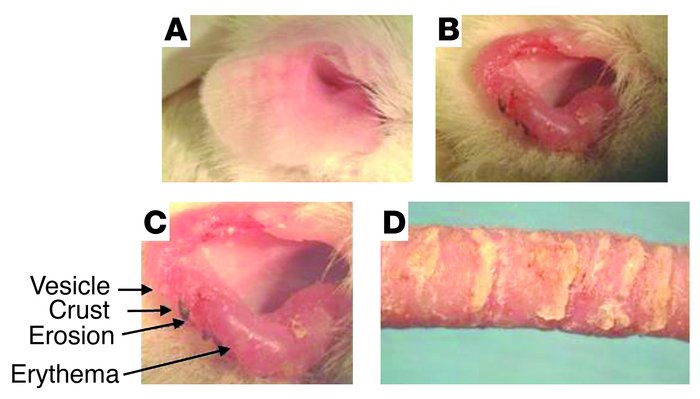 Progression of cutaneous blistering. () Normal unaffected ear. () Blistered ear of an NOD Abo DQ8+ mouse sensitized to gluten. () Magnified view of the ear in . () Tail of an affected mouse.