Uracil-DNA glycosylase (UNG) is involved in base excision repair of aberrant uracil residues in nuclear and mitochondrial DNA. Ung knockout mice generated by gene targeting are viable, fertile, and phenotypically normal and have regular mutation rates. However, when exposed to a nitric oxide donor, Ung–/– fibroblasts show an increase in the uracil/cytosine ratio in the genome and augmented cell death. After combined oxygen-glucose deprivation, Ung–/– primary cortical neurons have increased vulnerability to cell death, which is associated with early mitochondrial dysfunction. In vivo, UNG expression and activity are low in brains of naive WT mice but increase significantly after reversible middle cerebral artery occlusion and reperfusion. Moreover, major increases in infarct size are observed in Ung–/– mice compared with littermate control mice. In conclusion, our results provide compelling evidence that UNG is of major importance for tissue repair after brain ischemia. 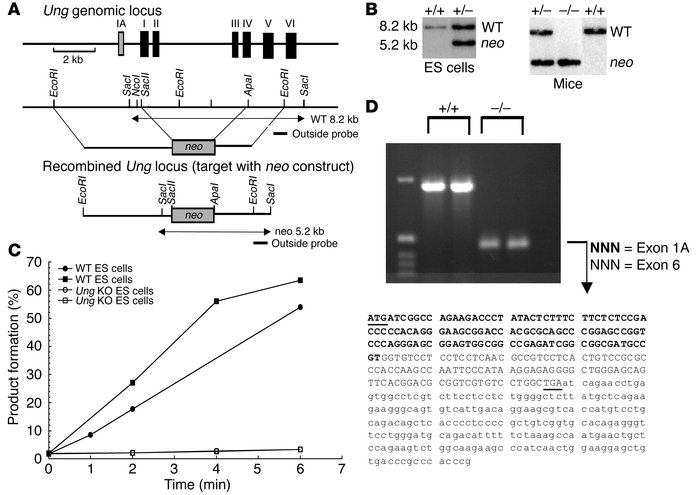 Generation of mice and the resulting DNA, RNA, and activity analysis. () Targeting strategy for inactivation of the gene. Lines (from top to bottom) show the map of the genomic locus, which consists of six exons (and exon 1a), the structure of the targeting construct ( construct), and the resulting mutant () allele after homologous recombination. Homologous recombination leads to the deletion of both mitochondrial (UNG1, exon 1a) and nuclear (UNG2) isoforms of uracil DNA glycosylase. Relevant Southern blot analysis was performed with the indicated 3′ outside probe. digestion results in an 8.2-kb fragment in wild-type and a 5.2-kb fragment in homologus recombinations. () Exemplary Southern blot analysis of -digested DNA from ES cells and mouse tissue (tails). , mutant. () Activity assays that measured the ability of +/+ and –/– ES cell lysates to excise uracil from an end-labeled oligonucleotide substrate demonstrated no detectable enzymatic activity in the knockout cells (independent experiments). () RT-PCR in which +/+ and –/– ES cells were used, demonstrated residual transcription of exons 1a and 6 in the recombined genomic locus. The promoter region for exon 1a was left intact by the knockout strategy and allowed residual transcription.