The renal papilla is a niche for adult kidney stem cells

The renal papilla is a niche for adult kidney stem cells

Many adult organs contain stem cells, which are pluripotent and are involved in organ maintenance and repair after injury. In situ, these cells often have a low cycling rate and locate in specialized regions (niches). To detect such cells in the kidney, we administered a pulse of the nucleotide bromodeoxyuridine (BrdU) to rat and mouse pups and, after a long (more than 2-month) chase, examined whether the kidney contained a population of low-cycling cells. We found that in the adult kidney, BrdU-retaining cells were very sparse except in the renal papilla, where they were numerous. During the repair phase of transient renal ischemia, these cells entered the cell cycle and the BrdU signal quickly disappeared from the papilla, despite the absence of apoptosis in this part of the kidney. In vitro isolation of renal papillary cells showed them to have a plastic phenotype that could be modulated by oxygen tension and that when injected into the renal cortex, they incorporated into the renal parenchyma. In addition, like other stem cells, papillary cells spontaneously formed spheres. Single-cell clones of these cells coexpressed mesenchymal and epithelial proteins and gave rise to myofibroblasts, cells expressing neuronal markers, and cells of uncharacterized phenotype. These data indicate that the renal papilla is a niche for adult kidney stem cells. 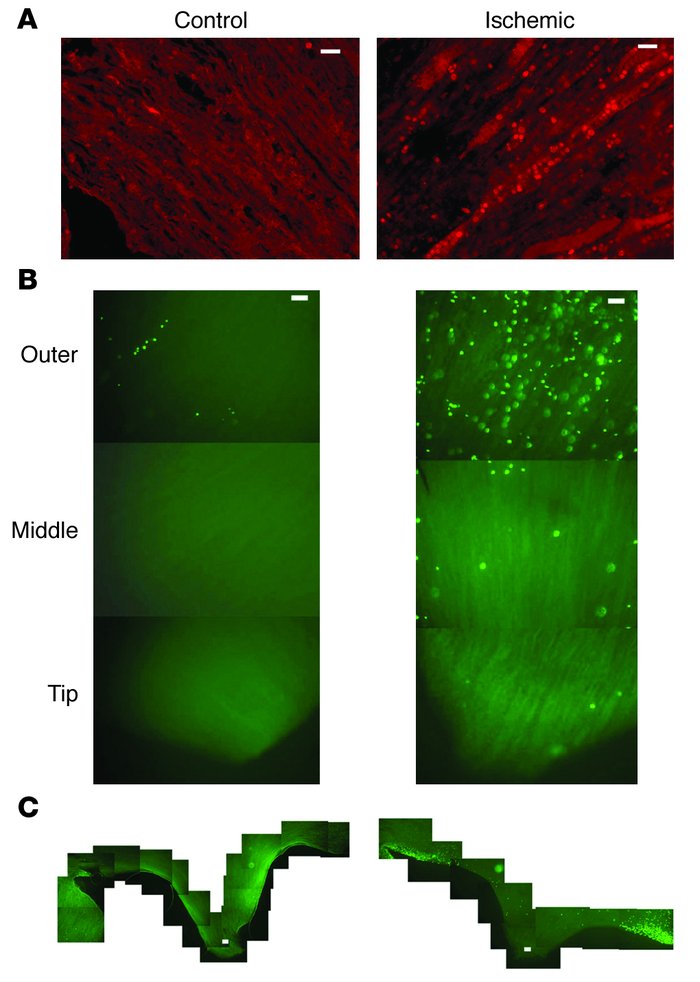 Cellular proliferation in the renal papilla after transient renal ischemia. (_) For detection of whether cellular proliferation occurs in the renal papilla after transient renal ischemia, 36 hours after the episode, kidneys were harvested and papillae were examined. () Control and ischemic papillae of the same animal stained with an antibody against the proliferation cell marker Ki-67 (rhodamine). Only the papillae of the post-ischemic kidney showed significant proliferation. ( and ) Control and ischemic papillae of two different experiments in which rats were given a dose of BrdU 1 hour before euthanasia and sections of papilla were examined for BrdU incorporation as marker of DNA synthesis. Sections of renal papillae are 100 μm in thickness. () Papillary sections from the outer or juxtamedullary area (top), middle area (middle), and tip (bottom) from control and ischemic kidneys. As shown, DNA synthesis was only detected in the papilla of the post-ischemic kidney, particularly in the outer papilla, the area next to the medulla. () In the kidney subjected to transient ischemia, DNA synthesis in papillary cells was most prominent in the region adjacent to the urinary space of the outer papilla. Scale bars: 50 μm.