OCH, a sphingosine-truncated analog of α-galactosylceramide (αGC), is a potential therapeutic reagent for a variety of Th1-mediated autoimmune diseases through its selective induction of Th2 cytokines from natural killer T (NKT) cells. We demonstrate here that the NKT cell production of IFN-γ is more susceptible to the sphingosine length of glycolipid ligand than that of IL-4 and that the length of the sphingosine chain determines the duration of NKT cell stimulation by CD1d-associated glycolipids. Furthermore, IFN-γ production by NKT cells requires longer T cell receptor stimulation than is required for IL-4 production by NKT cells stimulated either with immobilized mAb to CD3 or with immobilized “αGC-loaded” CD1d molecules. Interestingly, transcription of IFN-γ but not that of IL-4 was sensitive to cycloheximide treatment, indicating the intrinsic involvement of de novo protein synthesis for IFN-γ production by NKT cells. Finally, we determined c-Rel was preferentially transcribed in αGC-stimulated but not in OCH-stimulated NKT cells and was essential for IFN-γ production by activated NKT cells. Given the dominant immune regulation by the remarkable cytokine production of ligand-stimulated NKT cells in vivo, in comparison with that of (antigen-specific) T cells or NK cells, the current study confirms OCH as a likely therapeutic reagent for use against Th1-mediated autoimmune diseases and provides a novel clue for the design of drugs targeting NKT cells. 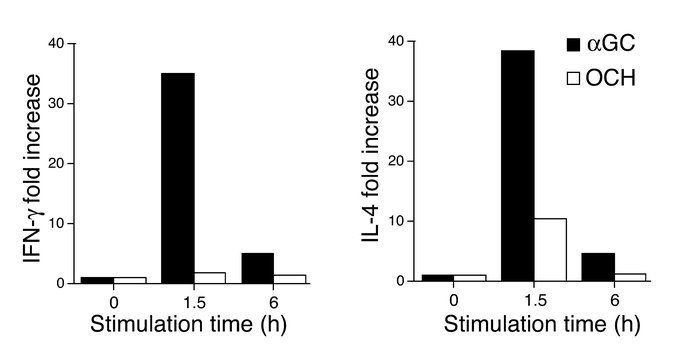 Transcriptional upregulation of cytokine genes by NKT cells stimulated with glycolipids in vivo. B6 mice were injected intraperitoneally with αGC or OCH (100 ∝g/kg), and liver NKT cells were isolated at the indicated time point. Total RNA was extracted and analyzed for cytokine mRNA by quantitative RT-PCR as described in Methods. Data are presented as “fold induction” of cytokine mRNA after glycolipid treatment. The amount of mRNA in NKT cells derived from untreated animals was defined as 1.