The Shumiya cataract rat (SCR) is a hereditary cataractous strain. It is thought that the continuous occurrence of poorly differentiated epithelial cells at the bow area of the lens forms the pathophysiological basis for cataract formation in SCRs. In this study, we attempted to identify the genes associated with cataract formation in SCRs by positional cloning. Genetic linkage analysis revealed the presence of a major cataract locus on chromosome 20 as well as a locus on chromosome 15 that partially suppressed cataract onset. Hypomorphic mutations were identified in genes for lanosterol synthase (Lss) on chromosome 20 and farnesyl diphosphate farnesyl transferase 1 (Fdft1) on chromosome 15, both of which function in the cholesterol biosynthesis pathway. A null mutation for Lss was also identified. Cataract onset was associated with the specific combination of Lss and Fdft1 mutant alleles that decreased cholesterol levels in cataractous lenses to about 57% of normal. Thus, cholesterol insufficiency may underlie the deficient proliferation of lens epithelial cells in SCRs, which results in the loss of homeostatic epithelial cell control of the underlying fiber cells and eventually leads to cataractogenesis. These findings may have some relevance to other types of cataracts, inborn defects of cholesterol synthesis, and the effects of cholesterol-lowering medication. 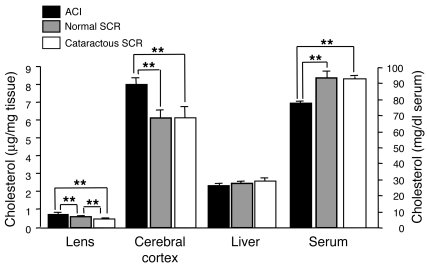