Complex I deficiency, the most common respiratory chain defect, is genetically heterogeneous: mutations in 8 nuclear and 7 mitochondrial DNA genes encoding complex I subunits have been described. However, these genes account for disease in only a minority of complex I–deficient patients. We investigated whether there may be an unknown common gene by performing functional complementation analysis of cell lines from 10 unrelated patients. Two of the patients were found to have mitochondrial DNA mutations. The other 8 represented 7 different (nuclear) complementation groups, all but 1 of which showed abnormalities of complex I assembly. It is thus unlikely that any one unknown gene accounts for a large proportion of complex I cases. The 2 patients sharing a nuclear complementation group had a similar abnormal complex I assembly profile and were studied further by homozygosity mapping, chromosome transfers, and microarray expression analysis. NDUFS6, a complex I subunit gene not previously associated with complex I deficiency, was grossly underexpressed in the 2 patient cell lines. Both patients had homozygous mutations in this gene, one causing a splicing abnormality and the other a large deletion. This integrated approach to gene identification offers promise for identifying other unknown causes of respiratory chain disorders. 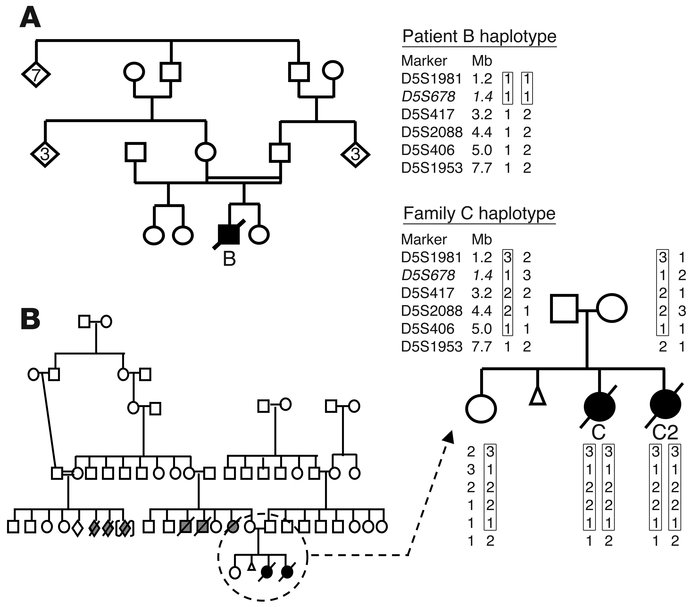 Pedigrees and haplotyping of families B and C. The symbols denote the following: open squares, unaffected males; open circles, unaffected females; open diamonds, an additional number of unaffected siblings; slashed symbols, unexplained infant deaths; triangle, miscarriages; black symbols, affected children. The homozygous regions in the probands are indicated by rectangles. The polymorphic marker shown in italics is not part of the original 5-cM genome-wide scan marker set. () Family B pedigree and the chromosome 5 haplotype of the affected child. () Family C pedigree and the chromosome 5 haplotype shared by the affected siblings.