Marfan syndrome is a connective tissue disorder caused by mutations in the gene encoding fibrillin-1 (FBN1). A dominant-negative mechanism has been inferred based upon dominant inheritance, mulitimerization of monomers to form microfibrils, and the dramatic paucity of matrix-incorporated fibrillin-1 seen in heterozygous patient samples. Yeast artificial chromosome–based transgenesis was used to overexpress a disease-associated mutant form of human fibrillin-1 (C1663R) on a normal mouse background. Remarkably, these mice failed to show any abnormalities of cellular or clinical phenotype despite regulated overexpression of mutant protein in relevant tissues and developmental stages and direct evidence that mouse and human fibrillin-1 interact with high efficiency. Immunostaining with a human-specific mAb provides what we believe to be the first demonstration that mutant fibrillin-1 can participate in productive microfibrillar assembly. Informatively, use of homologous recombination to generate mice heterozygous for a comparable missense mutation (C1039G) revealed impaired microfibrillar deposition, skeletal deformity, and progressive deterioration of aortic wall architecture, comparable to characteristics of the human condition. These data are consistent with a model that invokes haploinsufficiency for WT fibrillin-1, rather than production of mutant protein, as the primary determinant of failed microfibrillar assembly. In keeping with this model, introduction of a WT FBN1 transgene on a heterozygous C1039G background rescues aortic phenotype. 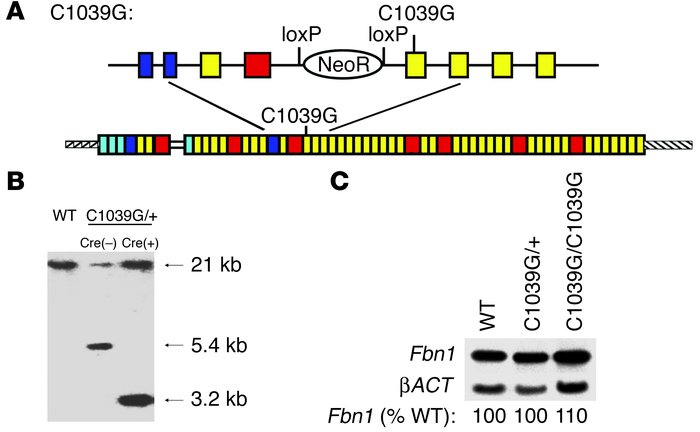