Under normal circumstances, the respiratory tract maintains immune tolerance in the face of constant antigen provocation. Using a murine model of tolerance induced by repeated exposure to a low dose of aerosolized antigen, we show an important contribution by CD4+ T cells in the establishment and maintenance of tolerance. The CD4+ T cells expressed both cell surface and soluble TGF-β and inhibited the development of an allergic phenotype when adoptively transferred to naive recipient mice. While cells expressing cell surface TGF-β were detectable in mice with inflammation, albeit at a lower frequency compared with that in tolerized mice, only those from tolerized mice expressed FOXP3. Blockade of TGF-β in vitro and in vivo interfered with immunosuppression. Although cells that expressed TGF-β on the cell surface (TGF-β+), as well as the ones that did not (TGF-β–), secreted equivalent levels of soluble TGF-β, only the former were able to blunt the development of an allergic phenotype in mice. Strikingly, separation of the TGF-β+ cells from the rest of the cells allowed the TGF-β– cells to proliferate in response to antigen. We propose a model of antigen-induced tolerance that involves cell-cell contact with regulatory CD4+ T cells that coexpress membrane-bound TGF-β and FOXP3. 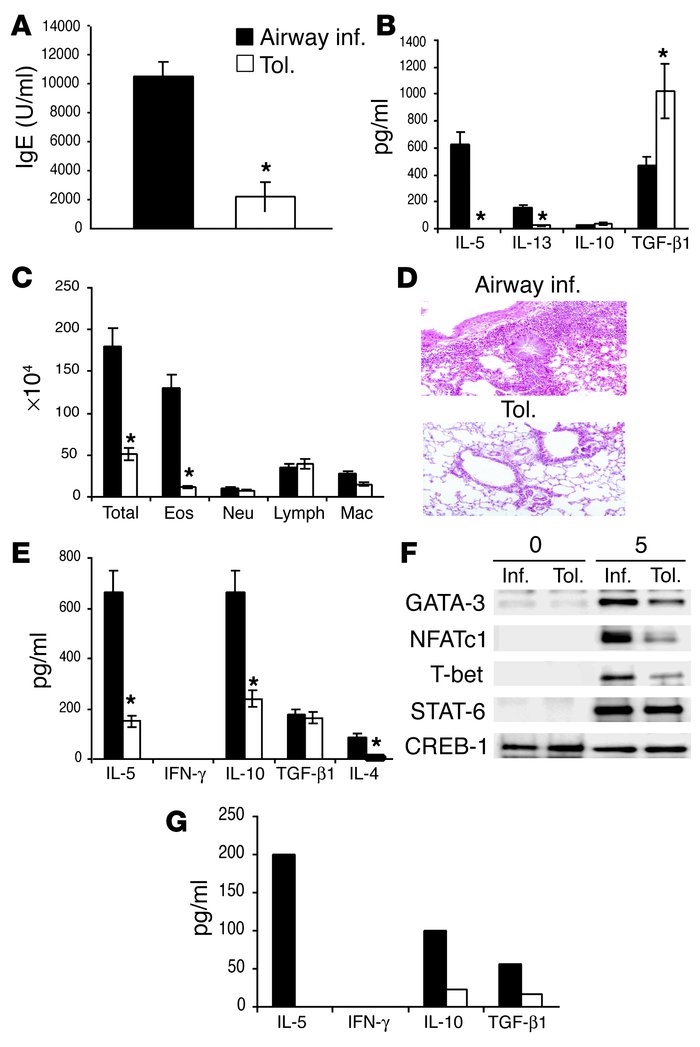 Repeated antigen exposure induces tolerance in the respiratory tract. Mice were exposed to aerosolized PBS alone (airway inflammation [inf.]; black bars) or 1% OVA in PBS (tolerance, [tol.]; white bars) daily for 20 minutes each day for 10 consecutive days (days 0–10). Both groups were then immunized intraperitoneally with 10 ∝g OVA and 1 mg alum on days 21 and 27. Treated mice were challenged by exposure to aerosolized 1% OVA in PBS for 20 minutes each day for 7 days from day 34 through day 42 (–, ) or used for spleen CD4 T cell isolation on day 34 ( and ). In the case of mice challenged by inhaled OVA, on day 43 BAL was performed, serum was collected, and lungs were removed for histological evaluation. Shown is a representative experiment of five, with three to six animals per group in each experiment. () OVA-specific serum IgE concentration was measured by ELISA. Shown is the mean plus or minus SD; * < 0.05 versus mice with airway inflammation. () Cytokine profile in the BAL fluid of tolerized mice compared with mice with airway inflammation as measured by ELISA. Shown is mean plus or minus SD with three mice per group (* < 0.05). () Mean plus or minus SD of total and differential cell (eosinophils, Eos; neutrophils, Neu; lymphocytes, Lymph; and macrophages, Mac) counts in the airways of tolerized mice and mice with airway inflammation as recovered by BAL (* < 0.05). () H&E staining demonstrating the absence of airway inflammation in the lungs of tolerized mice. Magnification ∞10. () Six animals were used per group and subjected to the inflammation or tolerance protocol, immunized with OVA and alum, and spleens isolated. Spleens from two animals were pooled in each group (three pools per group), and CD4+ T cells were isolated and stimulated with OVA and APCs in vitro for 5 days. Shown are the cytokine profiles in the supernatants as determined by ELISA (* < 0.05). () Nuclear factor expression in nuclear fractions of the CD4+ T cells after 5-day culture as determined by Western blot analysis using specific Ab’s. CREB-1 expression is shown as a marker for protein loading. () Lung-draining lymph nodes (LNs) were harvested from mice on day 37 after initial exposure to OVA or PBS, immunization with OVA/alum, and 3 days of challenge with inhaled OVA. LNs were pooled from three mice, cells recovered from the LNs were cultured with OVA and APCs for 3 days, and cytokines were measured in the culture supernatants by ELISA.