Dysbindin-1 is reduced in intrinsic, glutamatergic terminals of the hippocampal formation in schizophrenia

Dysbindin-1 is reduced in intrinsic, glutamatergic terminals of the hippocampal formation in schizophrenia

Eleven studies now report significant associations between schizophrenia and certain haplotypes of single-nucleotide polymorphisms in the gene encoding dysbindin-1 at 6p22.3. Dysbindin-1 is best known as dystrobrevin-binding protein 1 (DTNBP1) and may thus be associated with the dystrophin glycoprotein complex found at certain postsynaptic sites in the brain. Contrary to expectations, however, we found that when compared to matched, nonpsychiatric controls, 73–93% of cases in two schizophrenia populations displayed presynaptic dysbindin-1 reductions averaging 18–42% (P = 0.027–0.0001) at hippocampal formation sites lacking neuronal dystrobrevin (i.e., β-dystrobrevin). The reductions, which were not observed in the anterior cingulate of the same schizophrenia cases, occurred specifically in terminal fields of intrinsic, glutamatergic afferents of the subiculum, the hippocampus proper, and especially the inner molecular layer of the dentate gyrus (DGiml). An inversely correlated increase in vesicular glutamate transporter-1 (VGluT-1) occurred in DGiml of the same schizophrenia cases. Those changes occurred without evidence of axon terminal loss or neuroleptic effects on dysbindin-1 or VGluT-1. Our findings indicate that presynaptic dysbindin-1 reductions independent of the dystrophin glycoprotein complex are frequent in schizophrenia and are related to glutamatergic alterations in intrinsic hippocampal formation connections. Such changes may contribute to the cognitive deficits common in schizophrenia. 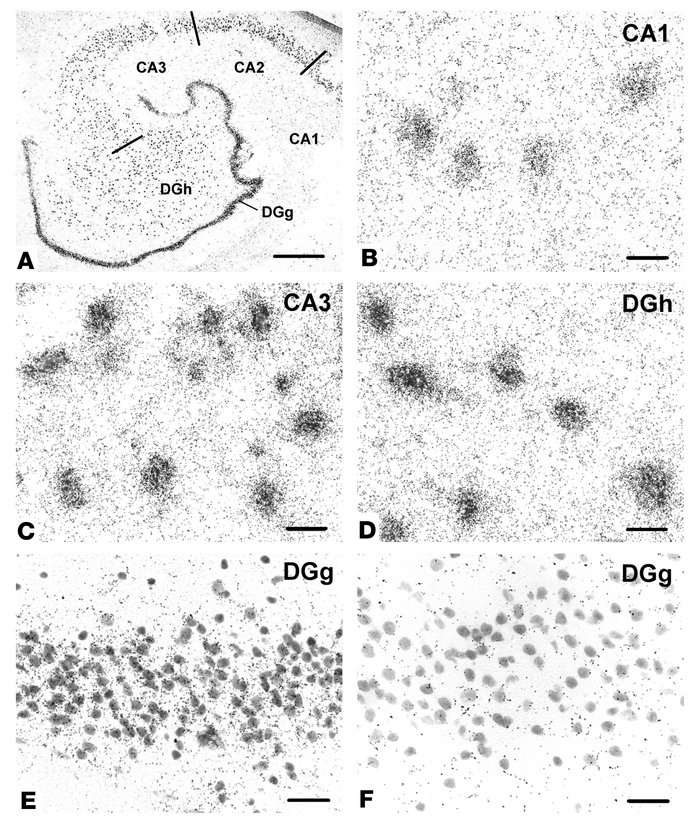 Dysbindin gene expression in normal human HF, demonstrated by in situ hybridization. The tissue was counterstained for Nissl substance. All principal neurons in the DG and CA1_3 were labeled with the antisense riboprobe, as seen at low magnification (). Gene expression in CA1 () and in the DGg () is lower than in CA3 () or in the DGh (). Comparison of DGg with antisense () and with sense riboprobes () shows that the latter produced very little cell labeling. Scale bar in : 1 mm; scale bars in _: 20 ∝m.