Classical research has suggested that early palate formation develops via epithelial-mesenchymal interactions, and in this study we reveal which signals control this process. Using Fgf10–/–, FGF receptor 2b–/– (Fgfr2b–/–), and Sonic hedgehog (Shh) mutant mice, which all exhibit cleft palate, we show that Shh is a downstream target of Fgf10/Fgfr2b signaling. Our results demonstrate that mesenchymal Fgf10 regulates the epithelial expression of Shh, which in turn signals back to the mesenchyme. This was confirmed by demonstrating that cell proliferation is decreased not only in the palatal epithelium but also in the mesenchyme of Fgfr2b–/– mice. These results reveal a new role for Fgf signaling in mammalian palate development. We show that coordinated epithelial-mesenchymal interactions are essential during the initial stages of palate development and require an Fgf-Shh signaling network. 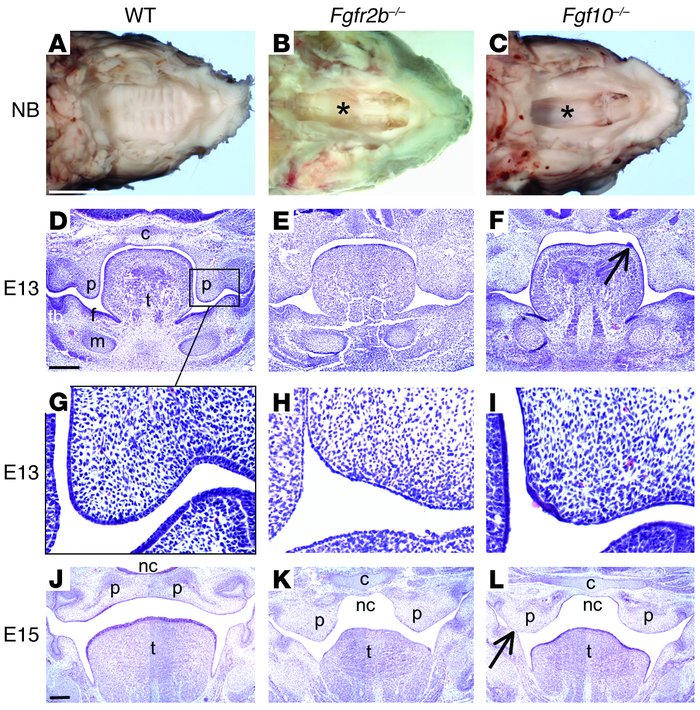 Palatal abnormalities in and mice. (_) View of the palate with mandible removed from NB mice. () WT palate was completely closed with clear symmetrical rugae. ( and ) and mutants exhibited a similar wide cleft of the secondary palate, with a view into the nasal cavity (asterisks). (_) E13 and E15 hematoxylin stained coronal sections through the oral cavity. (_) Higher-magnification views of _. By E13 the epithelium of WT mice had begun to thicken and stratify into a squamous pattern. That of both mutants was thin and lacked organization. Occasional patches of thicker epithelium did form, notably in mice either at the MEE () or as outgrowths from the dorsum of the tongue (, arrow). However, cells in these patches underwent apoptosis (see Figure ). ( and ) Palatal shelves were positioned above the tongue but neither met nor fused. () Epithelial fusion between the palatal shelf and mandible (arrow). C, cranial base; f, floor of the mouth; m, Meckel’s cartilage; nc, nasal cavity; p, palatal shelf; t, tongue; tb, molar tooth bud. Scale bars: , 2 mm (_, same magnification); , 200 ∝m (_, same magnification); and , 200 ∝m (_, same magnification).